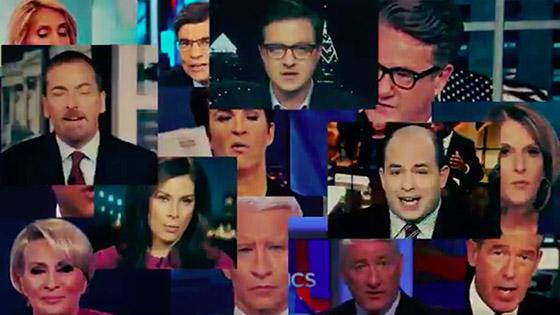 During violent protests, when it was made clear to Americans who the "enemy" is, President Trump's 2020 reelection campaign released a new TV ad-- “Let President Trump Do His Job”  -- targeting a different enemy: the mainstream press and Democrats.

Anyone critical of the president -- standard political practice in a free society -- is now his "enemy."

Despite the terrorist attack in Charlottesville, Virginia, when President Trump refused to call out the violent white supremacists,  KKK and neo-Nazis, the tone deaf ad was still released.

The 30-second spot, launched by Trump for President, has no public data on total spend. Advertising Analytics told MediaDailyNews that it ran in Arizona on Monday morning.

The ad kicks off with images of Senate Minority leader Chuck Schumer and Sen. Elizabeth Warren (D-Mass.) as the narrator begins: “Democrats obstructing. The media attacking our president.”

The ad goes on to tout President Trump’s record of job creation and lowering the unemployment rate, before mentioning the stock market and military strength. (MSNBC anchor Ali Velshi has challenged the veracity of the economic claims in the ad.)

“The president’s enemies don’t want him to succeed,” the male narrator says near the end of the spot, with images of the various media personalities named above, this time including Chuck Todd, April Ryan, Fareed Zakaria and Jake Tapper.

In light of the Charlottesville tragedy, many commentators and historians were stunned that Trump released a re-election ad -- feeling that the moment calls for moral fortitude, not division.