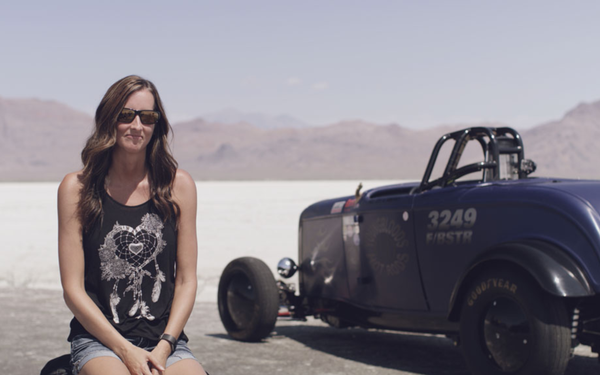 Kendall Motor Oil is embarking on a summer road trip via a series of videos.

Created by agency Bailey Lauerman, the “Good Stuff Road Trip” video series is being promoted via paid social. The series is being shared and promoted on the Kendall Facebook page. It currently has 11,000+ followers and some of the videos already have 110,000+ views.

One of the most interesting stops is the Bonneville Salt Flats in Utah, where racers come to soak up this one-of-a-kind racing experience. Featured in the video is Ali Youngblood, a former microbiologist who is now famous for setting world racing records as part of Youngblood Hot Rods.

The first video broke last week and new ones are posted every few days. Currently there are 10 videos planned: one teaser, eight videos from each of the stops on the road trip and one recap video. The recap video is planned to be released in mid-September.

Besides the Bonneville Salt Flats, other locations include Mustang Wranglers Car Club in Beaverton, Ore., the Denver Mecum Auction, the Indianapolis Motor Speedway & Museum, and the Brad Penn Oil Museum in Bradford, Penn. Kendall is the Official Motor Oil of Mecum Auctions, which provides ongoing interactions for the brand with consumers.

The videos highlight the passion of the car culture that exists between the coasts. At a time when there is so much interest in this area of the country, here is a brand that is authentically telling these stories and introducing a new generation to this culture, according to the company.

Kendall has a loyal fan base with families and businesses who have been using our products for generations, says Julie Wright, Kendall brand director.

“As a brand that’s steeped in this tradition of keeping our fans prepared to hit the open road, wherever that may be, it seemed only natural to take Kendall cross country,” Wright tells Marketing Daily. “The ‘Good Stuff Road Trip’ was always about our drive to meet Kendall fans where they are, tell their stories and create lasting memories with our biggest enthusiasts.”

The all-American road trip may sound like a cliché, but it’s one of the last bona fide experiences you can’t replicate, says Aaron Jarosh, digital strategist at Bailey Lauerman.

“That mystique of the open road is what drives a lot of car culture today, and it’s thriving in these overlooked places between the coasts,” Jarosh says. “The only way to authentically tell the stories of ‘flyover country’ is to drive through it, and who better to do that than American oil brand that’s been around for 136 years.”