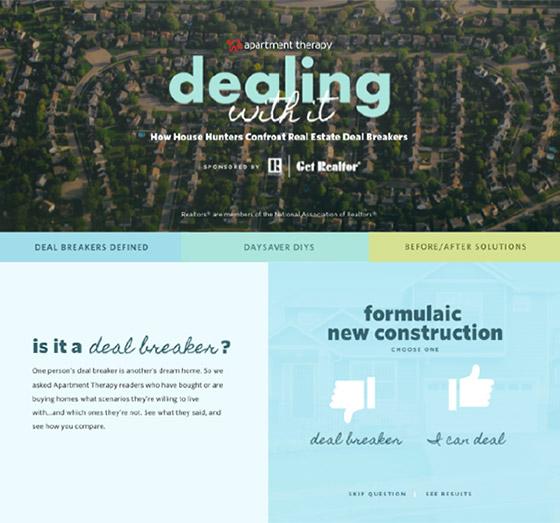 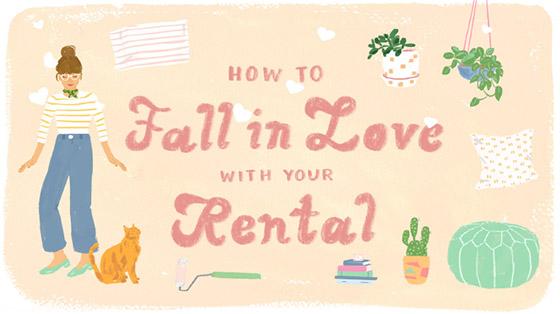 The sites’ following among millennials and beyond has sparked interest among advertisers angling to connect with their devoted audience.

he property recently hired Susan Kaplow as chief content officer. Kaplow previously held the same title at SheKnows and was EVP at Refinery29.

“Dealing With It,” a new campaign for the National Association of Realtors (NAR) which launched Aug. 7 and will run through year end, seeks to connect with Apartment Therapy’s audience and identify common deal-breakers renters face in the complex home buying/selling process.

NAR wants to show how brokers can help prospective buyers break down these barriers and navigate through them. For example, DIY projects can help bring a space that may appear riddled with problems to its full potential.

The campaign features an interactive destination page and four videos. Apartment Therapy developed a co-branded "Dealing with It" microsite that includes interactive polls that aim to identify common dealbreakers, DIY projects to inspire creativity, and before and after solutions that showcase winning scenarios. The campaign seeks to underscore the valuable role of realtors play during the increasingly-complex process of home buying/selling.

Visitors to the site have a few things to play with, including surveys and “before/after” flip cards that can help pull viewers in and keep them engaged. In fact, most of the engagement has been on the before and afters, according to Anna Hoffman, Apartment Therapy and Kitchn’s director of creative services. “The goal is to reinforce the value of working with a realtor. The client wanted to show how realtors can help house-hunters and see past cosmetic imperfections and to understand what the deal-breakers are,” Hoffman said.

Analyzing its readers, Apartment Therapy said its audience is 7.5x more likely to be “pre-movers” than the internet average, according to Quantcast's August 2017 data. Quantcast defines “pre-movers” as people who are actively considering moving. And 13% are more likely than the internet average to be renters, according to comScore, July 2017. Overall, 63% of Apartment Therapy’s audience owns their home, while 29% rent.

Apartment Therapy’s audience is chock full of millennial women who prioritize life at home. “They want to experiment with looking at different media and creative styles in their creative executions,” said Chris Philips, VP, sales development, Apartment Therapy and Kitchn. These executions range from  illustrations to animated GIFs, to photos of interiors and live video where real people are interviewed.

And while diverse creative executions appear to perform well, they also have different lives on social platforms: “We’re seeing success with illustration and animation on Facebook, and illustration on Pinterest. The Instagram audience is liking a lot of illustration as well, but real faces are most successful on Instagram,” Philips said.

“Our readers are excited about home ownership as an investment, but also investing time and energy in their homes as renters. Their homes are investments in who they are. Decorating is an emotional investments and we’re trying to give them inspiration,” he said. Philips said shorter-form content is in high demand, especially when there’s a fun payoff one click away on the landing page.

From March through June of this year, Apartment Therapy worked with NAR on a campaign called “House Hustle: Crisis Averted." There were four house tours, two shown on videos and two photo-only.

Apart from home owners, renters are an important audience for Apartment Therapy. For its rental listings client ForRent.com, the company created a campaign to promote renting.

Four blog posts from May through July spoke to readers about all the reasons to be a renter. The goal? To make renting cool. The four posts in the campaign were accompanied by illustration, animated video, live interview video, and photos. Titles of the posts included: “7 Lessons I’ve Learned After Renting My Whole Life,” and “How To Fall In Love With Your Rental.”