How Carlsberg Is Leveraging A TEDx Talk By Its Deceased Founder 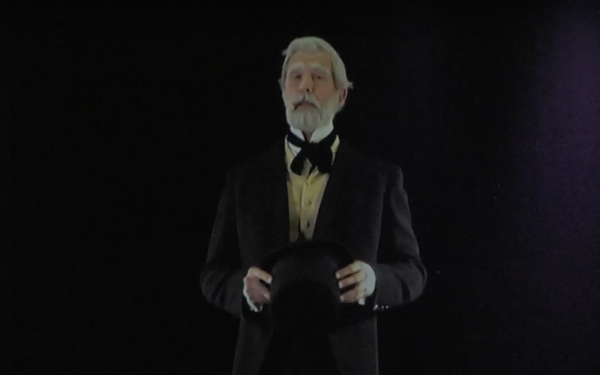 Innovation junkies got an extra jolt during this week’s TEDxCopenhagen.

The feat, timed to spotlight the brewery’s 170th anniversary, was achieved through holographic technology and a Danish actor who both resembles Jacobsen and studied his way of talking and moving, according to the company.

The concept: Allow the founder himself to convey his life philosophy, summarized in the talk’s topic: “Why you should answer every question with ‘probably.’” As explained in the 18-minute presentation, Jacobsen believed that a “probably mindset,” acknowledging that perfection can never be achieved, creates a fertile environment for continuous improvement. The talk was one of six given on the event’s theme, “Trust Uncertainty.”

Securing a TEDx speaking invitation — a prime opportunity for free exposure — wasn’t a big challenge, given the Carlsberg founder’s iconic status in Denmark, and the event’s venue: Copenhagen’s New Carlsberg Glyptotek, a museum that houses the personal art collection of J.C.’s son.

But optimizing that opportunity is another matter. The Carlsberg Group and agency FCB Happiness, Brussels, dedicated substantial resources and attention to detail in creating the talk, support materials and promotion plan.

Nearly half of the 268 available tickets for live attendance at the event were reserved for Carlsberg, which invited press, customers from key markets, friends of the brewery and The Carlsberg Foundation, and various other stakeholders and influencers, reports C.C. Clark, FCB Inferno’s European director of communications and PR.

To drive international viewing of the event’s YouTube livestream,  the team employed Carlsberg’s and TEDxCopenhagen’s social media, as well as press and influencer outreach.

In addition, for inspiration and pride-fostering purposes, the company provided a link to the livestream to its offices around the world, to encourage viewing by its 41,000 employees.

To ensure that it accurately conveyed Jacobsen’s thoughts and speaking style, the talk was written by a team of speechwriters and biographers from The Carlsberg Foundation, who employed the company’s archival trove, as documented in a “making of” video viewable on YouTube.

The archives were also key in ensuring historical accuracy in a teaser film (below) that depicts Jacobsen, in 1883, receiving a speaking invitation from TEDxCopenhagen, along with a series of real events from his life.

The team also shot footage of attendees watching the talk and expressing excitement about it, and posted a short promotional video, along with a link to the full video of the presentation, on the same day.

Why opt for the virtual resurrection of Jacobsen?

Despite its age and size, Carlsberg found itself challenged by smaller craft beers that are capitalizing on purveying credible, authentic stories about how their beers are manufactured, says Clark. “Carlsberg’s competitors were all jumping to heritage campaigns that showed their stories, too, by going back to the founders’ first days, the authentic way of making the beer, and so on,” he adds.

Carlsberg sought to create a campaign that would increase awareness of its own heritage, but also foster a perception of the brand as being innovative, in order to enhance loyalty and grow sales.

“We didn’t want to do a nostalgic heritage campaign that leaves people looking back to the better days,” Clark explains. “We wanted to create something that’s relevant today — that brings added value to [consumers’] lives, instead of obliging them to look back at our past.”

One research insight: Carlsberg drinkers within the brand’s core target audience of men 25 to 35 (and, secondarily, women in the same age range) are interested in entrepreneurship and lifelong learning, he reports. “Looking back at Jacobsen’s business and life philosophy, we discovered that it’s quite relevant for those starting businesses today — and for basically everyone living today.”

Two days after the event, the full talk video is showing about 4,500 views on YouTube, in addition to the estimated 1,000 who viewed it live on site and online, and the teaser movie is showing more than 1,500 views. In addition, the “making of” and event-footage videos have each generated several hundred views on YouTube.