Who's On First, What's Going On With Second: Beware The 'Shadow' Auction 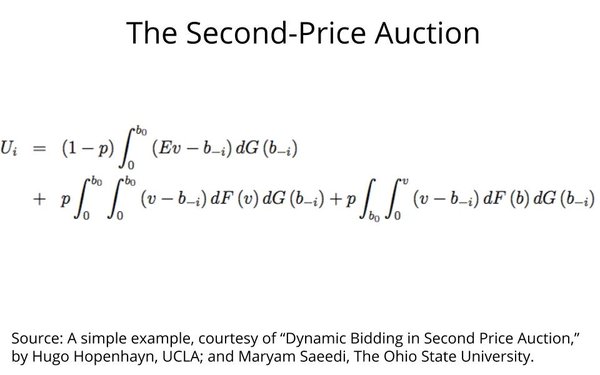 The auction price models powering the multibillion programmatic media-buying marketplace can be confusing to even the most sophisticated traders, but when the team at digital audience exchange OpenX detected some especially odd bidding -- and more importantly, winning -- behavior taking place in the marketplace, they decided to investigate firsthand.

They put their own money where their mouths were, making thousands of dollars worth of programmatic buys through an anonymous DSP to understand what was going on.

What they found was a new “shadowy,” “first-price auction” marketplace emerging that may violate industry standards that have been the foundation of programmatic trading since it first began.

“The effort analyzed more than a million impressions through multiple exchanges across nearly a dozen sites and identified several SSPs [supply-side platforms] that appeared to be deploying non-transparent first-price mechanics to significantly increase the clearing price,” Jason Fairchild, chief revenue officer and a co-founder of OpenX, writes in a blog posted this morning.

What OpenX found was that some of the exchanges were effectively “tuning” their algorithms to circumvent the so-called “second-price auction” that has been the basis of programmatic market bidding since its inception.

The second-price auction -- best known as the method utilized by eBay -- became the foundation for programmatic media buying because it provided a margin of safety for advertisers and media buyers, preventing them from getting caught in bogus auction wars and overpaying for biddable inventory.

In a second-price auction, the highest bidder pays only one cent more more than the second highest bid made for the the biddable inventory.

There are many reasons why this method emerged as Madison Avenue’s media-buying standard -- but mainly it was intended to assure the demand side would not overpay due to bogus auctions.

OpenX executives said they began to suspect that “shadow first-price” auctions were emerging because they were beginning to lose bids that they consistently won in the past, and decided to investigate with an actual marketplace test.

Fairchild says the first-price auction method likely emerged due to other recent changes in the industry -- especially header bidding, as well as so-called “container” technology enabling multiple header bidders to operate simultaneously. While that may sound highly technical, it resulted in exposing a buyer’s actual highest price -- or “first-price” -- enabling some exchanges to effectively tweak their algorithms to set new second-price rules that “clear an auction at 95% (or higher) of a buyer’s first-price bid.”

As bad as that might seem, OpenX’s probe reveals even more insidious behavior. Instead of using the first-price auction method unilaterally across all bids, it appears these exchanges are using them selectively to target only the highest-priced inventory, where the yield will be greatest to the publisher or network offering the inventory.

A graphical analysis of the data, which has not been published, but which was provided to Digital News Daily, does in fact show the density of these shadow first-price auctions clustered around the most expensive inventory.

The result, says Fairchild, is that a handful of rogue players are effectively changing the rules of the game without any transparency, and media buyers who believe they are competing in a second-price auction market are effectively participating in a first-price market without their knowledge.

OpenX is not being completely altruistic in exposing this news. The company will unveil a new product Thursday that will effectively enable traders to opt to participate in either a first- or second-price auction, but with full transparency. The reason, Fairchild says, is that there is nothing inherently wrong with those market mechanics, as long as participants understand which marketplace they are participating in.

“The real risk I see after so long in this industry, is that we must act to call out the non-transparent actions being undertaken by some actors that really could kill the goose that is laying the golden eggs,” Fairchild tells DND. “If buyers and sellers do not feel they are operating in a fair and transparent market, new monies from TV, audio, out-of-home and every other form of consumer engagement will delay in their migration to programmatic. That is what keeps me up at night -- and that is why we spend so much time and energy driving home the need for transparency and quality.”

media buying, programmatic
1 comment about "Who's On First, What's Going On With Second: Beware The 'Shadow' Auction".
Check to receive email when comments are posted.
Next story loading