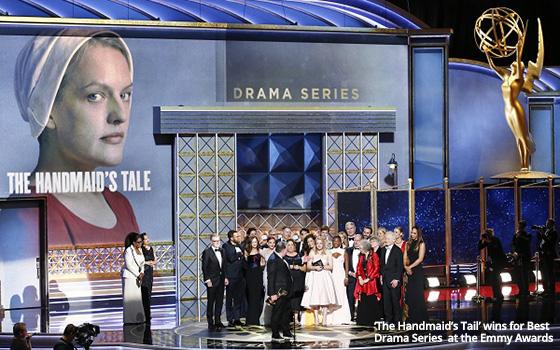 What do the big winners at Sunday’s Emmy Awards have in common? They don't take commercials, folks.

That's not their purpose. They exist to lure subscribers, not advertisers. In essence, this is the big difference between the new world and the old one that everyone seems to agree is slipping away (however slowly).

One day long ago at one of my first jobs in the broadcasting trade press, my then-editor asked me a simple question: Who is the customer for the TV industry we were covering? Naturally, I answered “viewers.” I was young and inexperienced.

“No,” he replied, “it's the advertisers.” That's why they make the shows, he schooled me. Sure, he conceded, their value is based at least in part on their attractiveness to viewers. But their primary purpose is to create an environment for commercials for which advertisers will shell out lots of money.

This was the system that held sway from the 1950s until it began to slowly change in the 1980s. And despite what everyone says about the death of the ad-supported TV model, it is still a multibillion-dollar industry today.

And yet, at awards time -- such as at Sunday’s Emmy Awards on CBS -- the accolades are going increasingly to the programming (sorry, “content”) that is not made for advertisers, but produced primarily for viewers, turning that long-ago editor's lesson on its head.

CBS, the network that aired the Emmys on Sunday night, received no awards during the telecast. Neither did Fox or ABC. NBC, to its credit, won six (four of which went to “Saturday Night Live”). HBO was the leader with 10 awards during the show. Hulu had five. Netflix had four. FX had two.

Looking at these results, you might conclude that CBS's airing of the Emmys amounted to a big prime-time promotional platform for the subscriber-based content services that are increasingly drawing attention away from ad-supported networks such as CBS.

It is as if the TV business is now bisected into two very different worlds -- the one that is still characterized by the interplay between networks and sponsors, and the one that just makes shows for which viewers -- not advertisers -- seem quite willing to shell out money.

These two kinds of TV would appear to be so different that having, say, a network such as CBS compete with subscriber-based content services such as HBO and Netflix for creativity awards would seem to be a losing proposition for CBS (or any advertiser-supported network).

Content in so-called “network” television is made in an entirely different way than in the (almost) anything-goes world of pay-streaming.

An ad-supported TV network cannot really be in the “Handmaid’s Tale” business. It has to be in the “NCIS” or “Big Bang Theory” business.

Let it be said that there is nothing wrong with a very good network television show. For example, “This is Us” is made for NBC under all of the “restrictions” cited above and almost everyone agrees it is a great show.

Sterling K. Brown won an Emmy Sunday night for Best Actor in a Drama for “This is Us.” There are many who believe “This is Us” is the best drama on network television and, based on that consensus and its popularity, it may have deserved the Best Drama Emmy over “The Handmaid's Tale.”

Back around the turn of the current century, the annual Emmy race in the drama category was characterized by a showdown between “The West Wing,” which in its day was the finest drama on network TV, and “The Sopranos” on HBO.

When was the last time a drama series on broadcast television won for Best Drama? That was way back in 2006. The show was “24.”