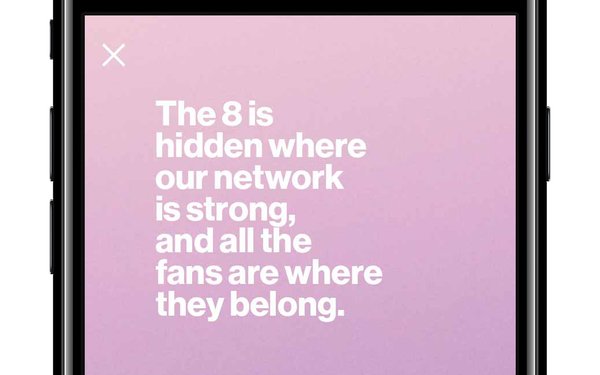 Apple products generally come with a fair amount of buzz and excitement, but Verizon has been giving customers in eight metropolitan areas a chance to increase that buzz for the upcoming iPhone 8 in the form of a virtual treasure hunt.

Teaming with Snapchat, the telecom giant has been dropping clues for customers in Chicago, New York, Los Angeles, San Francisco, Seattle, Denver, Dallas and Atlanta to find virtual “8”s in those cities via augmented reality lenses. The first eight people to find the 8’s in each city each day received an iPhone 8 before it’s released to the general public.

“‘Find the 8’ is a key differentiator for Verizon,” John Nitti, chief media officer at Verizon, tells Marketing Daily. “We wanted a unique way to showcase the power of the Verizon network, especially in densely populated  locations, while promoting one of the most anticipated phones of the year.”

The promotion is the first AR-powered scavenger hunt on Snapchat, Nitti says. Following clues such as, “Find the 8 around sunset hidden far to the east. There’s a place people go to ride and to feast” (for Chicago’s Navy Pier), hunters were directed to a location and time in which the “8” would be unlocked. They were then asked to send a picture of the virtual numeral for a chance to win. (Those who found the “8” but were not selected for a phone received other prizes, including Verizon gift cards.)

“This is an exciting way for us to create engagement for our customers that takes real-time events into account, while showing the power of our network,” Nitti says. “Not only is this a first, but it is an innovative application of Snapchat’s functionality, as the game technology uses geolocation tracking and real-time environmental data to trigger key moments in the gameplay.”

Verizon selected the cities based on population density and a way to show off the network’s capabilities. The promotion also required extensive logistical support to pull off, Nitti says. “While we’d love to run the promotion everywhere, these eight cities required quite a bit of coordination and extensive preparation, including working with local law enforcement on crowd control planning,” he says.

Verizon’s scavenger hunt wasn’t the only telecom-related search last week, however. To celebrate its recent announcement that taxes and fees would be included in service plan charges, Boost Mobile launched scavenger hunts in New York, Chicago and Los Angeles.

The “Flip off taxes” hunt asked searchers to find a hidden “Golden Switch” (part of Boost Mobile’s “Project Switch” campaign, which provides customers an easy way to switch carriers) in each of those three cities. The first person in each market to find the switch, which was clued through the brand’s Facebook and Twitter pages on Friday, was eligible to win a $5,000 grand prize.