Good Idea, But Ads.txt Isn't Exactly Crushing It -- Yet! 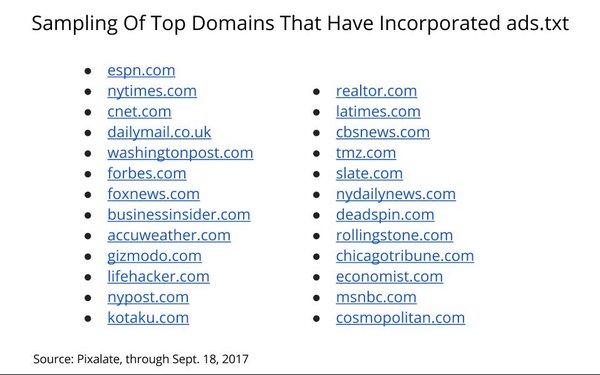 When the Interactive Advertising Bureau’s Tech Lab introduced ads.txt earlier this year, it was yet another noble attempt at industry self-regulation of untoward programmatic advertising practices. The idea was that, by incorporating a thin piece of ads.txt code, publishers could weed out third parties that arbitrage their ad inventory without their permission -- or, even worse, drive advertising impressions to “spoof domains.”

A good idea for sure, but one that requires compliance and scaled adoption for it to be meaningful. Several months into the program, that doesn’t appear to be happening.

An in-depth analysis of publisher adoption of ads.txt by programmatic data platform Pixalate finds the take rate so far is, well, meh!

On the plus side, Pixalate found higher -- but still relatively small -- levels of penetration among top domains: 3.8% of the top 5,000 Alexa-ranked domains have adopted it.

Ranked via Pixalate’s proprietary view of the top 5,000 domains based on volume, adoption is even better: 8.74%.

“A lot of clients have been asking about ads.txt, so we did some digging to see the adoption rates,” Pixalate Marketing Manager and former MediaPost reporter Tyler Loechner told us, adding, “Just trying to present the data as neutral given the interest we've seen in it.”

Loechner said his gut is there are two possible angles to this story so far:

One: “Implementation has been slow, which is noteworthy given that the initiative is completely reliant on adoption. Yes, it's obviously going to take time for ‘widespread’ adoption.”

Two: “This one is purely a hunch… but a lot of the sites that have adopted ads.txt are news sites. I wonder if all the ‘fake news’ and brand safety chatter, specifically around news organizations, sparked faster uptake across that industry. Just a thought.”

Good thoughts. What do you think? Post comments below, or let me know at joe@mediapost.com, and we’ll follow up on it.
ad fraud, programmatic, regulation
5 comments about "Good Idea, But Ads.txt Isn't Exactly Crushing It -- Yet!".
Check to receive email when comments are posted.
Read more comments >
Next story loading