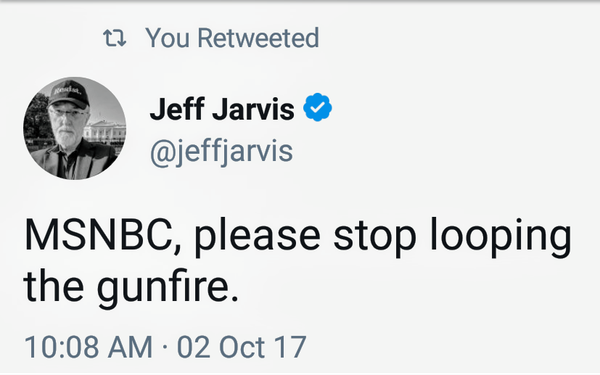 It’s been more than a year since I published a column titled “How (Not) To Cover A Massacre” in the aftermath of the June 2016 Pulse nightclub massacre in Orlando. It was one of several columns I’ve written about the inextricable connection between such acts and media, including one that followed the Sandy Hook shooting in December 2012.

Since those events took place, the capacity of media to serve as an accelerant has only grown -- especially social media, which is why I modified the headline on today’s column to “share” instead of “cover” a massacre.

I first learned about last night’s Las Vegas massacre when I woke up, checked my phone and saw it on Instagram, of all places, though there were several push notifications from newspapers I subscribe to as well.

Naturally, the first thing I did was turn on the television to see how cable news outlets were covering the event. Nor surprisingly, they’ve been covering it the way they cover every human drama that plays out in real time: a continuous loop of replayed footage of the worst parts of it, over and over and over again.

I don’t know what the solution is. I don’t expect anyone to put any genies back in any bottles, but I think it’s possible for news outlets to demonstrate a modicum of restraint. As media critic Jeff Jarvis tweeted this morning, “Please stop looping the gunfire.”

It wouldn’t be the first time television and other news outlets demonstrated restraint. It’s remarkable to me how they’ve done that vis a vis 9/11 footage. I was struck by this a few weeks ago, when Esquire published its “Falling Man” article showing photos of people falling from the Twin Towers, including one particularly famous one. I had never seen them before, but I think 16 years later it wasn’t inappropriate to revisit it in a historical context.

But the continuous looping of a massacre in real time on 24/7 cable news outlets and social media feeds in the immediate aftermath cannot be a good thing for society. And in some way -- big or small -- it has to be a factor in motivating future ones.

journalism, news, tv
4 comments about "How (Not) To Share A Massacre".
Check to receive email when comments are posted.
Read more comments >
Next story loading