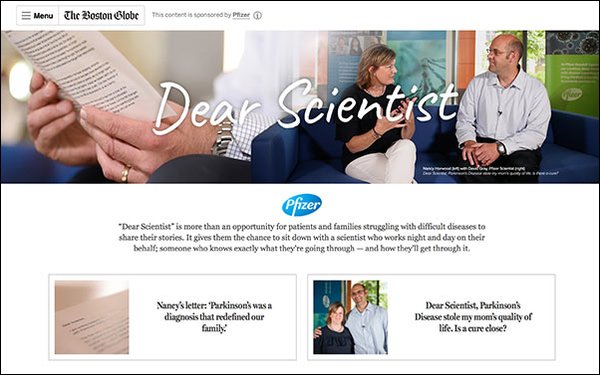 The Boston Globe is partnering with Pfizer on a branded content series called “Dear Scientist” to highlight the dedicated biopharmaceutical scientists and the patients and families impacted by the diseases they are working to cure.

“The goal of ‘Dear Scientist’ is to put a human face on the often invisible scientists who spend years or even decades driven to solve a seemingly incurable disease,” per a statement.

Each of the three installments, which include a mix of articles, photography and video, will spotlight a different disease.

The series, created by The Boston Globe’s branded content studio, BG BrandLab, documents scientists at Pfizer’s Kendall Square’s research site, located in Cambridge, Mass., and their interactions with families and patients affected by a disease and the progress of research.

More than 1,000 researchers are headquartered at Pfizer’s Kendall Square site, working on discovery and clinical programs across a range of diseases.

"Dear Scientist" features a family affected by a disease who write a letter to a biopharmaceutical scientist, which is published on a digital hub for the “Dear Scientist” series on The Boston Globe’s site.

A Pfizer scientist reads the letter and is introduced to the family to share an intimate and touching dialogue on their perspectives. The conversation is also produced as a video in a narrative story format.

The first installment of the "Dear Scientist" series was released this week and profiles Nancy Horwood and her mother's 25-year battle with Parkinson's disease.

David Gray, senior director in Pfizer's Neuroscience Research Unit in Kendall Square, who has been pursuing a Parkinson's cure for almost a decade, reads the letter and has an emotional meeting with Horwood.

Doug Most, the head of BG BrandLab, was an editor of The Boston Globe for over a decade. He said he came into this new role “with an inherent desire for great storytelling,” due to his editorial background.

He told Publishers Daily his aim is to produce branded content “that rivals what we are trying to do with the newsroom. A good branded studio should operate like a mini newsroom.”

"Dear Scientist" is one of the more ambitious partnerships the studio has had, Most said, specifically due to the high-quality video reporting.

Boston is a “thriving pharmaceutical hub right now,” and Pfizer wanted this series to showcase the scientists who have devoted their careers to finding the cure to one particular disease, Most added.

The scientists aren’t just “holed up in some lab somewhere,” but are aware of the human impact their research has on those affected by illness.

In the video for the first installment, Gray tells Horwood: "I personally believe we're going to find a cure. And I don't say that lightly."

The next two installments of “Dear Scientist” are scheduled for release at the end of October and before Thanksgiving, respectively.