Want Mr. Kool-Aid At Your Next Bash? 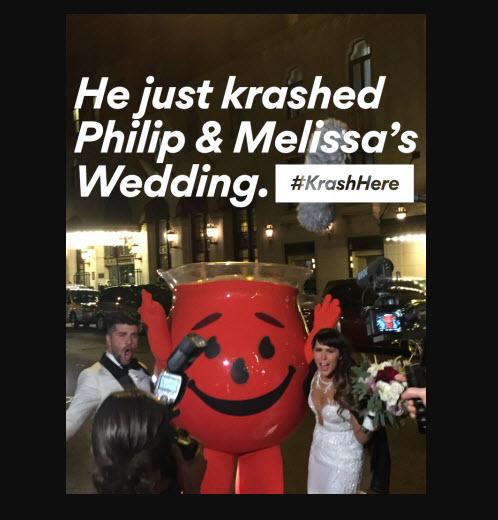 With the holidays fast approaching, competitive hosts may already be giving some thought to how to make their parties stand out from all the rest.

If an irrepressibly perky — even somewhat antic — guest is on your party wish list, here’s an idea (albeit kind of a long shot).

The winner of a new Kool-Aid #KrashHere sweepstakes will get a personal appearance by Mr. Kool-Aid. Yes, we’re talking about the pitcher-with-a-smile (and arms and legs) mascot who first appeared in ads in 1954, and began bursting through walls and yelling “Oh yeah!” in TV spots back in the ’70s.

To enter, U.S. mainland residents 18 or older can tweet @koolaid, using the hashtags #Krashhere and #contest, and explain why they want Mr. Kool-Aid to appear at their party or event. The contest closes on Nov. 11, and the winner will be chosen by random drawing on or around Nov. 13.

There are hitches, however. Mr. Kool-Aid isn’t really going to hang: The rules say he’ll only stay for “up to” 15 minutes. Also, no alcoholic beverages may be present during his visit — so maybe that holiday party idea isn’t so hot after all.

Kool-Aid’s promotion says he’ll “krash” any occasion — and offers a video of his recent appearances (below) as evidence. But the brand gets to approve the date, time and location requested by winner, and the date needs to be scheduled by January 20, 2018. Kool-Aid throws out ideas like having Mr. Kool-Aid ask a date to the homecoming dance, or surprise grandma at her birthday party…

On the plus side — for proud homeowners, anyway — Kool-Aid has promised that all walls will remain intact. Also, Mr. Kool-Aid will be happy to pose for photos and video with friends and family attending the event. (Indeed, as usual, the winner must agree to let the contest sponsor take photos/videos and use them for promotions at will.)