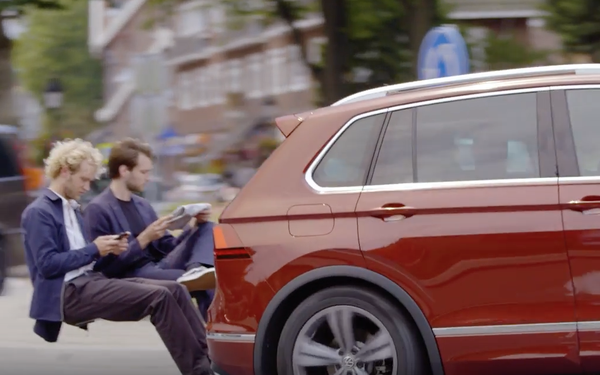 Volkswagen is launching an online film to promote its new Tiguan Allspace.

The car, available in November, is fitted with two extra passenger seats.

“There are a large number of innovations when you compare the Tiguan Allspace to its predecessor, but the biggest difference is size,” says Jasper van der Bijl, head of marketing communication VW, in a release.

DDB & Tribal Worldwide Amsterdam dramatized the revamped vehicle's increased space by attaching two “floating” passengers to the rear of the current Tiguan and then driving it around. The stunt was performed on a single day in several Dutch cities. Hidden cameras were used to register the public’s reactions.

In the 90-second film, pedestrians and other road users can’t believe their eyes when they see the Tiguan drive by with floating passengers. And when the car comes to a stop at a gas station, it draws a lot of attention with people taking a closer look to figure out how it’s done.

The video is featured on Volkswagen’s social channels, driving traffic to a more detailed web page about the all-new Tiguan Allspace. Also available for viewing is a behind-the-scenes video that documented the stunt’s creation.