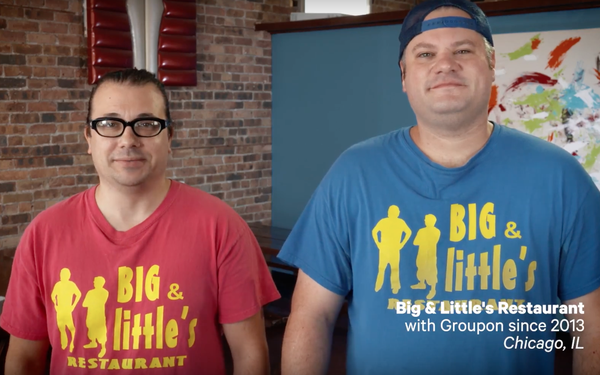 For Groupon, business is a two-pronged affair: Get consumers to buy the discount deals, and also get merchants to enlist to be a part of them.

“It demonstrates the notion of the two sides of our marketplace,” Jon Wild, vice president of brand marketing for Groupon, tells Marketing Daily. “We want to appeal to consumers, but we also want to tell the story of our merchants.”

The campaign, from agency O’Keefe, Reinhard & Paul, features many local business owners spliced together to tell the story of their success. Featuring a broad swath of business owners, from restaurateurs to tourism companies to fitness studios, they describe how Groupon helped them attract new customers and encourage repeat business. The spot ends with the line, “Groupon: Where businesses grow, and customers save.”

“It [represents] the narrative in ways that can help [businesses] grow,” Wild says. “It shows how we’ve grown from the original premise” of offering deals to customers.

The effort is meant to not only highlight the business successes, but also how those successes contribute to the great community. That approach serves a double purpose of appealing to consumers who want to support local businesses, Wild says.

“We feel it has resonance for both our consumers and our merchants,” he says. “Consumers care about the quality of the merchants in their neighborhoods.”

The campaign will run on broadcast and cable networks such as CNN, MSNBC and Fox News, and will be featured on the compay’s social media channels.