Kia Comes 'Out Of Nowhere' To Take On Lexus 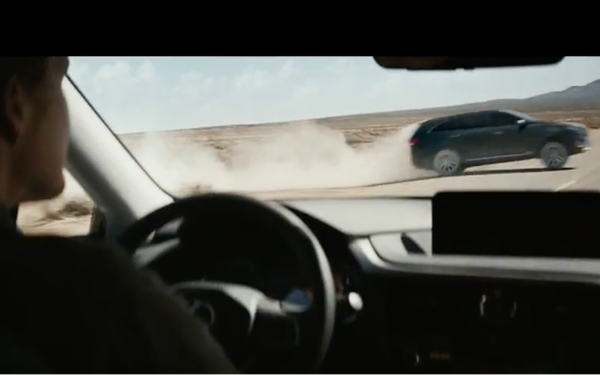 Kia Motors America is matter of fact about its assertion that the Kia Sorento is able to literally leave the Lexus RX 350 in the dust.

The 60-second TV spot from David&Goliath begins innocently enough with the Lexus SUV tooling along in the desert.But it soon becomes clear that there is something in the distance, a mysterious presence on an entirely different trajectory, speeding across the rugged landscape. Just as the two SUVs seem to be headed for one another, the Kia Sorento crosses the desert road in front of the Lexus, leaving the competitor in a cloud of dust.

“You get what you pay for” is no longer the general rule of thumb for most consumers when it comes to choosing a car. According to a recent survey by Wakefield Research for Kia, 54% of American adults disagree with the idea that the more expensive a car is, the better quality it will be.

This trend is reflected in this year’s J.D. Power Initial Quality Study -- one of the automotive industry’s top indicators of new vehicle initial quality -- which ranked Kia Motors number one for the second consecutive year, surpassing luxury brands like Porsche and BMW.

To champion the accolade and the challenger spirit of the brand, David&Goliath created tandem “Out of Nowhere” commercials (for the Sorento and Cadenza). In each, a Kia surpasses an “expected” car in the industry to become the true leader. Both Sorento and Cadenza also took top quality J.D. Power awards in their respective categories (Sorento for midsize SVU and Cadenza for large car).

The goal of this campaign is to generate awareness of how far Kia has come and how well-built its products are engineered, while also teasing the imminent arrival of the Kia Stinger, according to the agency.

The campaign will feature 30-second versions of each spot on national network/cable media in addition to NBA and NFL media, and will be supplemented with digital and social media components.