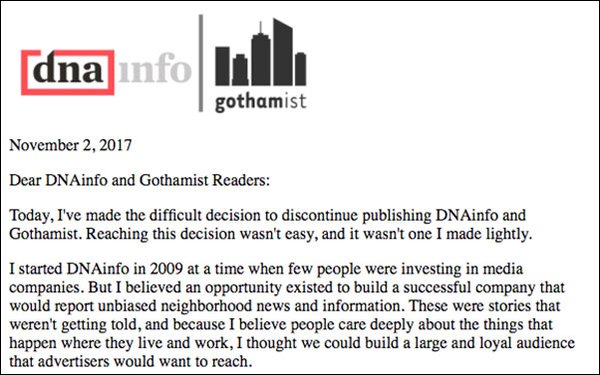 DNAinfo and Gothamist are dead, and 115 employees are out of work. The billionaire owner of the local news sites, Joe Ricketts, pulled the plug just a week after employees at the two sites voted to join the Writers Guild East of America.

Ricketts, who is also the founder of TD Ameritrade, published a letter yesterday afternoon on the web addresses where the sites used to live.

“DNAinfo is, at the end of the day, a business, and businesses need to be economically successful if they are to endure. And while we made important progress toward building DNAinfo into a successful business, in the end, that progress hasn't been sufficient to support the tremendous effort and expense needed to produce the type of journalism on which the company was founded," he wrote.

And the unionizing didn’t help.

A spokeswoman for DNAinfo told the NYT: “The decision by the editorial team to unionize is simply another competitive obstacle making it harder for the business to be financially successful.”

Ricketts made it clear he did not support his employees’ decision to unionize. In September, he published a post on his blog titled “Why I’m Against Unions At Businesses I Create.”

He argued that “unions promote a corrosive us-against-them dynamic that destroys the esprit de corps businesses need to succeed.”

The Writers Guild East of America union told the NYT in a statement: “It is no secret that threats were made to these workers during the organizing drive. The Guild will be looking at all of our potential areas of recourse, and we will aggressively pursue our new members’ rights.”

Ricketts shut down all the DNAinfo sites, including ones that did not vote to unionize, such as its Chicago, Los Angeles, San Francisco and Washington hubs.

DNAinfo acquired Gothamist in March. At the time, Gothamist cofounders Jen Chung and Jake Dobkin told readers it was time to “take our growth to the next level,” and DNAinfo “offers us that opportunity.”

Employees are getting three months paid administrative leave and an additional four weeks severance, per the NYT.

Multiple reports and tweets from DNAinfo and Gothamist staffers suggest employees were blindsided by Rickets’ decision.

DNAinfo and Gothamist attracted more than 9 million readers a month across its sites.