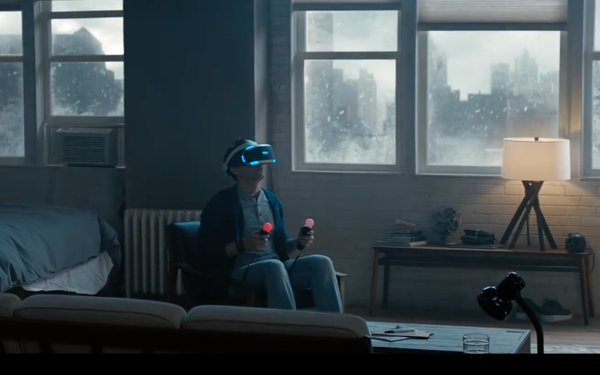 As the holidays approach, Sony is touting its virtual-reality capabilities as a point of difference.

A new spot in its ongoing “Greatness Awaits” campaign focuses on the popular title, “The Elder Scrolls V: Skyrim,” and touts the immersive capabilities of the gaming set’s VR accessory.

“VR is such a sensory experience,” Mary Yee, vice president of marketing for Sony PlayStation, tells Marketing Daily. “As we move into the holiday season our marketing campaigns will continue to convey the highly immersive, transformative nature of PlayStation VR.”

The spot, from agency BBH, depicts a gamer putting on the VR headset, leading snow to start falling in his apartment. After a thud on the building’s roof, a giant claw busts through the gamer’s ceiling and transports him into the gaming world, where he jumps head-first off a cliff to face a giant dragon.

The VR focus is intended to highlight Sony’s history of innovation and groundbreaking gaming experience (with more than 100 VR games on the market and 60 more expected in 2018) particularly as it competes with the Microsoft’s newly released advanced (but sans VR capabilities) console, the Xbox One X, Yee says.

“PS4 Pro and PS VR are just a few examples of first to market products in their respective categories where we’ve pioneered and will continue to learn and grow the category through experience,”  she says. “It’s the ideal opportunity to experience VR this holiday.”