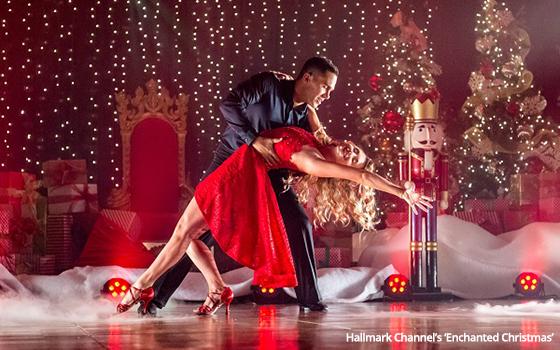 The Hallmark Channel has planted its Christmas flag on the far western end of one of Manhattan's trendiest neighborhoods.

In a vacant retail space not currently leased, Hallmark has set up a pop-up facility it calls the Museum of Christmas. The name is a bit of a misnomer. It is not really a museum in the traditional sense -- with historical exhibits, for example.

Instead, Hallmark bills this temporary installation as an “experiential” one. Basically, this 8,400-square-foot space contains a series of holiday-themed display areas that have been designed principally for visitors to take selfies in.

These include an area of giant Christmas tree ornaments you can sit in (they’re really spherical chairs done up like Christmas balls), a lineup of over-sized Christmas stockings you can stand behind, a large stack of packages wrapped as Christmas gifts that you can sit on, and other such arrangements.

The facility opened yesterday (Wednesday) and stays open through this coming Sunday (November 19). Admission is free.

The address -- 459 West 14th Street -- places this Hallmark Christmas attraction in the heart of Manhattan's storied Meat-Packing District, which in the past 30 years has been transformed from a section of meat wholesalers into one of the city's best-known destinations for high-end shopping. Diane Von Furstenberg's offices and flagship store are across the street.

The Hallmark Museum of Christmas is practically underneath the city's High Line park -- built atop a former elevated railroad line whose trains used to bring beef on the hoof into the area for slaughter.

Now, Hallmark hopes to draw Millennials (and anyone else) who might be passing by their storefront this weekend to come inside and enjoy some Christmas kitsch.

Whether or not anyone will do so remains to be seen. However, Hallmark Channel's devotion to Christmas -- of which this storefront “museum” is just a small part -- is renowned and already bearing fruit, even this early in the holiday season.

The channel’s annual “Countdown To Christmas” -- in which it saturates its schedule with made-for-TV Christmas movies -- started October 27 with the first of 33 new original holiday movies, 32 for Christmas and one for New Year's.

This past weekend's two new Christmas movies did so well in the ratings that Hallmark put out a press release about the numbers this week. Hallmark reports that its Saturday night original (November 11) called “The Sweetest Christmas” drew 3.9 million total viewers and 821,500 viewers in the target demo -- women 25-54.

Hallmark says the movie drew more women 25-54 than either CBS, NBC or Fox from 8 p.m. to 10 p.m. that evening. The movie was about a woman who owns her own bakery -- and recently broke up with a long-time boyfriend -- who then reunites with her high school sweetheart -- just in time for Christmas!

A day later, Hallmark's Sunday night movie – “Enchanted Christmas” (pictured above) –-- drew 3.6 million viewers and 812,000 in the demo. The movie was about a young widow who is trying to renovate and revive a rundown ski lodge in Utah when she is reunited with a former love who is a dancer there -- just in time for Christmas!

These numbers are fairly typical for Hallmark's Christmas movies, all of which carry titles like the two that aired last weekend. The plots of these movies, which all end happily, are sometimes eerily similar as well.

It is not an insult to describe the nature of Hallmark’s Christmas movies as “wholesome” or even “corny.” They are both of these things, and many people seem to like them.

They apparently engender such good feelings among their target viewers -- who choose them over so much of the edgy content that dominates on TV (or streaming services) these days – that only a Scrooge would make the effort to criticize them.

I guess that means that this TV Blog too will have a happy ending -- just in time for Christmas!