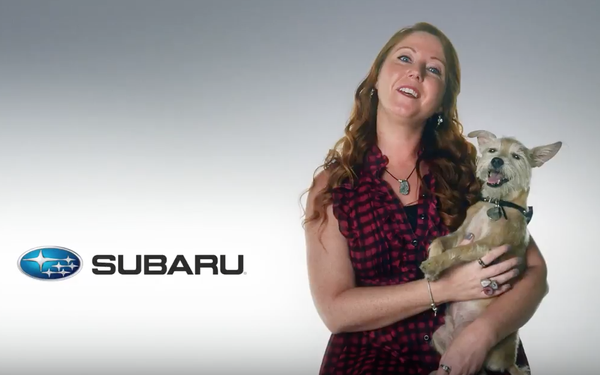 Subaru of America is launching a campaign to support its 10th anniversary of its “Share the Love” event.

The automaker is debuting five new spots from Carmichael Lynch featuring heartwarming stories from real people who have been positively impacted by the “Share the Love” event. The campaign continues the “Put a Little Love in Your Heart” tagline introduced last year.

The spots will air on national television and through digital and social promotions. The campaign will also continue through targeted media integrations.

Over the last 10 years, Subaru has donated more than $94 million to its local and national charity partners, including most prominently, the ASPCA, Make-A-Wish, Meals on Wheels America, and the National Park Foundation. The automaker hopes to surpass a total of $115 million in this year’s campaign, kicking off today.

“Put a Little Love in your Heart” is a 60-second  overview spot. “Bruce” features Bruce and Chris, two unlikely friends brought together by Meals on Wheels, proving that sometimes, what begins as a meal evolves into something just as nourishing.  “Matthew” is a brave, young boy battling a critical illness. Thanks to Make-A- Wish, he now has the playhouse of his dreams.

“Amanda” rescued and adopted Scrappy, a friendly pup in need, from a local shelter supported by the ASPCA and the two quickly became best friends. Now, it’s hard to tell who saved who. “Victoria” is an inspiring, young woman who’s devoted half her life to supporting and volunteering in a national park. Like the National Park Foundation, Victoria is passionate about preserving our parks and history for generations to come.

Throughout the event, Subaru will partner with top national morning shows, like Good Morning America and The TODAY Show, to highlight the 10th anniversary of Share the Love, in addition to collaborating with influencers, as well as video and musical partners, Pandora, YouTube, Vevo and Roku.

Alan Bethke, senior vice president of marketing for Subaru of America Inc., says “Share the Love” is more than a campaign, it’s a “passion project.”

During this year’s event, taking place from Nov. 16 to Jan. 2, Subaru will donate $250 for every new Subaru vehicle purchased or leased to the customer’s choice of the four national charities with a minimum guarantee of $250,000. Participating Subaru retailers can select one or two hometown charities from their local community in which customers can direct their support.

This year, more than 660 local charitable organizations are participating in the Subaru Share the Love event. With some retailers adding their own donations to the hometown charities, total donations by Subaru and its participating retailers are expected to exceed previous years.