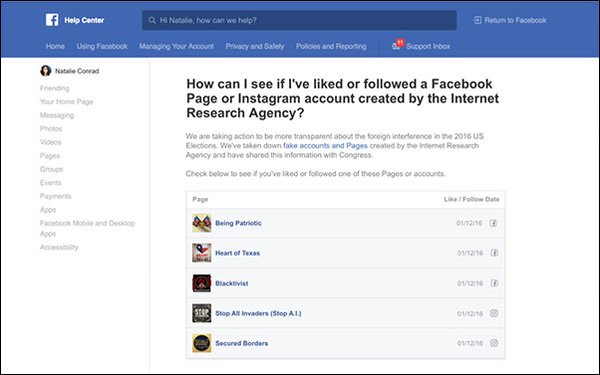 Waxing transparent, Facebook is creating a portal to show users if and how they helped the Russian government spread fake news over the past two years.

Specifically, the forthcoming tool shows which of the Kremlin-powered Internet Research Agency Facebook Pages and Instagram accounts users may have liked or followed between January 2015 and August 2017.

“It is important that people understand how foreign actors tried to sow division and mistrust using Facebook before and after the 2016 U.S. election,” Facebook stated.

The tool should be available to select users by the end of the year in the Facebook Help Center.

Before Congress, Facebook had to explain how trolls backed by the Russian government were able to reach roughly 126 million U.S. users in the run-up to the 2016 presidential election.

For Facebook, the revelation was all the more embarrassing because it had estimated that only 10 million U.S. users had been exposed to Russian disinformation.

As part of a broader response to its Russia problem, the social giant recently vowed to sacrifice future profits for a better-policed platform.

“I’ve directed our teams to invest so much in security -- on top of the other investments we’re making -- that it will significantly impact our profitability going forward,” Facebook CEO Mark Zuckerberg recently told investors.

“I’m dead serious about this,” he said. “Protecting our community is more important than maximizing our profits.”

Softening the sting for investors, the proclamation was delivered directly following the release of a stellar third-quarter earnings report.

Among other profit-compromising investments in security and “election integrity,” Facebook recently vowed to hire more than 250 people across related teams.

But Facebook’s investment in platform security goes far beyond that, as Zuckerberg explained on Wednesday.

“We already have about 10,000 people working on safety and security, and we’re planning to double that to 20,000 in the next year to better enforce our Community Standards and review ads,” the tech mogul told investors.

“In many places, we're doubling or more our engineering efforts focused on security,” Zuckerberg added. “We are also building new AI to detect bad content and bad actors -- just like we've done with terrorist propaganda.”