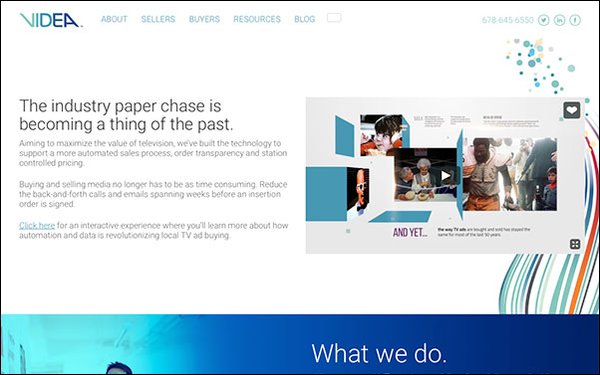 “We will be well positioned next year to offer at least five stations in 90% of the markets,” say Shereta Williams, president of Videa, speaking with Television News Daily.

Many programmatic local TV station platforms see scale as a major problem -- that is, signing enough TV stations and having them commit higher levels of ad inventory for traditional national spot advertisers.

The Videa platform is available in 96 markets, averaging around two stations per market. It is on 188 stations, in 37 states, in 68.5 million TV homes and has 432.4 billion annual impressions.

“In some markets we have six, some we have one,” she says. “The ideal scenario is to have the top five stations in each market. This doesn’t matter much for smaller digital media advertisers, but it matters a lot for traditional spot advertisers.”

So far this year, Videa has 823 TV station spot advertising orders, with an average spend by brand of $545,000.

Big media agencies have long complained about the mostly manual process of buying local TV station advertising -- something programmatic TV platforms promised to solve. TV stations worry that using such systems might mean losing sales control over advertising inventory, which might be sold at the lowest price.

At the same time, Williams says media agencies continue to push broadcasters, networks and stations to solve TV stations' current local advertising issues with programmatic platforms. She says one senior media agency executive is “challenging their buyers to do 100% of their buys on at least one of these [programmatic TV] platforms.”

Publicis Media, for example, is taking matters into its own hands. It has been working on a major $50 million local TV programmatic ad deal for a client covering 27 markets. Frank Friedman, president of local investment at Publicis Media, has been a proponent of programmatic/automatic systems.

Beyond inventory, measurement continues to be a key issue, says Videa’s Williams. “A lot of inventory owners -- networks, stations -- have started to create their own different [audience] segments/metrics. It makes it hard for a marketer to put together a single buy with one meaningful currency.”

Complicating matters is the forthcoming new TV station ATSC 3.0 technology standard. The positive is that ATSC 3.0 will help TV stations compete with digital media and cable TV networks when it comes to audience targeting and addressable one-to-one advertising.

But that is a long ways off. TV stations will still need programmatic TV platforms over the next several years. “Near-term [TV] spot isn’t going to be one-to-one [addressable advertising]. But programmatic can complement that one-to-one with branding and awareness,” says Williams.

Then TV stations will see results. “They’ll have the best of both worlds: broad reach, the ability to target, and go one-to-one.”