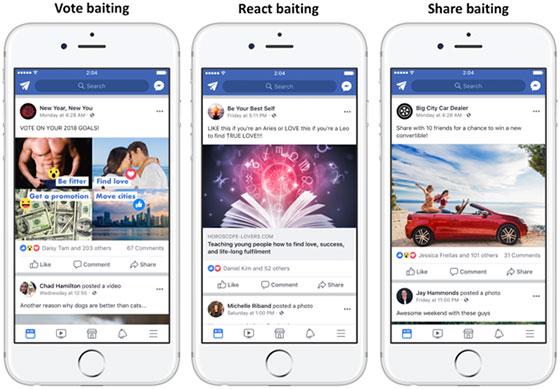 While the guidelines for the type of language used in the post seem a bit vague, the consequences are not.

In the coming weeks, Facebook plans to implement stricter rules to demote Pages that seem to "systematically and repeatedly use engagement bait to artificially gain reach in News Feed" by going against "one of our key News Feed values, authenticity."

Facebook defines "authenticity" as posts that "resonate most," and explains how its employees work to understand the types of stories and posts people consider genuine and the type that people find misleading, sensational and spammy.

"Similar to our other recent efforts to demote clickbait headlines and links to low-quality web page experiences, we want to reduce the spread of content that is spammy, sensational, or misleading in order to promote more meaningful and authentic conversations on Facebook," Facebook Ops Integrity Specialist Henry Silverman and Engineer Lin Huang wrote in a post published Monday.

The plan requires rolling out a tactic that the two refer to as "Page-level demotion." The timing will give publishers several weeks to adapt. This is one way Facebook aims to increase efforts to reduce engagement bait.

The news seems similar to the Google's recent move to reduce the amount of fake news that serves up in Google News. The company said it will now delist publications that mask their country of origin or purposely mislead readers. It will rely on artificial intelligence to make the determination.

In both instances, the guidelines seem to specifically address misrepresentation, with the ability to finally enforce some sort of consequences for doing so.