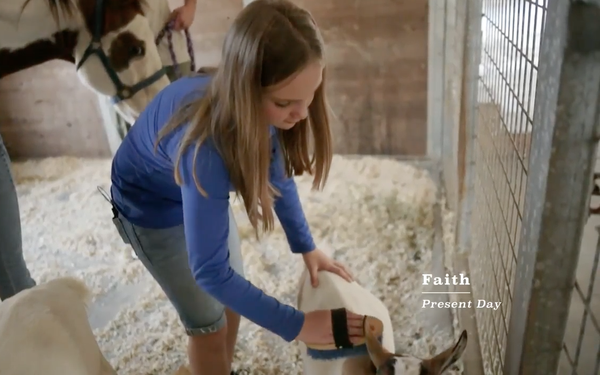 'Tis the season for end-of-the-year donation solicitations from every non-profit known to man. But one San Francisco charity is electing to build its brand along with hustling for funding.

Havas-aligned creative agency Camp + King has created a pro bono campaign and brand identity kit for Forget Me Not Farm Children’s Services, a program of the Sonoma Humane Society. The scope of the work includes a three-minute brand video to drive donations, new logo, brochure, email template and pitch copy the organization can use for future presentations.

The program’s purpose is to teach kids from neglected and abusive homes how to take care of living things. Animal activities help kids learn empathy, gentleness and caring, and gardening activities get them out in nature and teach them how to be good custodians of the land and nurture themselves through healthy food. The farm has served more than 8,000 children since it opened in 1992.

The video is a case study that chronicles the story of Faith, a young girl whose tough life and demeanor has been circumvented through time spent and experiences caring for animals at FMNF. In the first clip shot in 2012, wide-eyed Faith says, “Sometimes I don’t be gentle. Now I’m practicing.”

Faith’s adoptive mother explains how she was neglected and abandoned before being rescued, and how visits to the Sonoma County sanctuary have taught her how to love and take care of living things. Current clips show an amazing transformation of Faith into a happy, peaceful pre-teen caring for the non-profit’s horses.

Camp + King employees visited the non-profit in June as one of its semi-annual Day of Giving events and the work arose as a result of that field trip.

“We actively sought a day of volunteerism for the agency and knew going in that day, that some people would physically volunteer on the farm and some of us would volunteer on their marketing efforts because some of us couldn't ‘physically’ work on the farm for various reasons,” says Anne Saulnier, a junior partner and director of talent and operations at Camp + King, whose paid clients include Dish Networks, Energizer, Verizon, Re/Max, Del Taco and Amazon.

The agency’s goal was to help the program with marketing efforts (they had none) to help increase donations so money could be raised to continue to operate the farm.

“We thought it necessary to modernize their look to appeal to a wider reach and audience,” Saulnier tells Marketing Daily.

The relationship between the agency and nonprofit came about after a committee of staff members brainstormed different non-profit organizations to help and presented the options to the partners, Roger Camp and Jamie King.

“The committee's recommendation was Forget Me Not Farm because it hit on many values that the committee had expressed as priorities,” Saulnier says, including that it touched humanity by helping children and benefited the environment with its organic farm component.

“If employees are happy with the company they work for, they're happy in general and it helps everyone, including clients,” Saulnier says. “The staff feels very passionate about giving back and since we have the skills and the talent, why not share that wealth?”