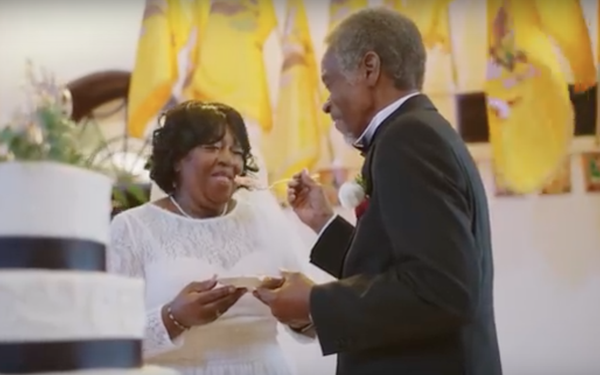 People seem to expect a lot out of their voice-controlled remotes, and in the spirit of holiday cheer, Comcast is dramatizing some of the craziest requests.

For the effort, Comcast asked its customers to post some of their most unusual voice searches on Facebook. One video begins with some of the simpler requests made by customers (such as “Show me ‘Love Actually’”) before moving into some of the odder requests, such as providing a military couple the dream wedding they were never able to have. The video features the actual couple and their adult daughter explaining the constraints that forced them to have a courthouse wedding. The request — “Show my parents the wedding they never had” — is fulfilled in a church, to great applause. “Another request granted by the Xfinity voice remote,” declares a voiceover.

Other stories include an elderly woman who receives a new piano to play for her community, a mom who gets a pizza the size of a table for her 12-year-old daughter’s soccer team, and a boy whose mom wants him to have the best marble-race toy in town.

The campaign is intended to tap into the general goodwill and emotion of the holidays, while also featuring the company’s X1 Voice Remote, according to a company representative. The remote, the company claims, has been delivered to 18 million homes in the country, and has processed a half-billion voice requests in the last month alone.

The company expects the campaign to continue into the new year.