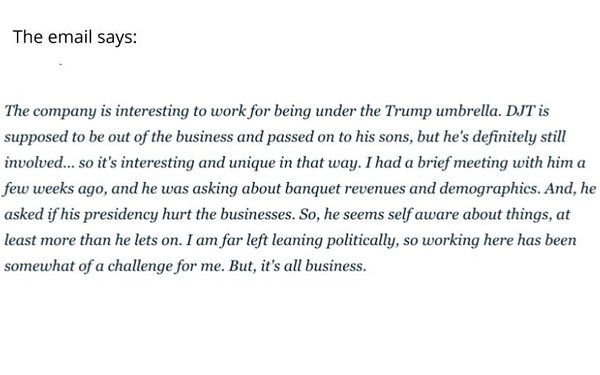 An email sent from Jeng Chi Hung, director of revenue management at Trump International Hotel in Washington, D.C., has again sparked calls for investigations into possible presidential conflicts of interest.

As first revealed byDaily Beastreporter Betsy Woodruff, Hung wrote an email to an acquaintance saying President Trump is still involved in the management of the Trump Organization.

Trump was “supposed to be out of the business and passed on to his sons, but he’s definitely involved,” says Hung in the email. Hung goes on to write about “a brief meeting” he had with the President a few weeks prior, when Trump asked “about banquet revenues and demographics.”

President Trump also asked if “his presidency hurt the business,” according to the email received by the Daily Beast.

It is not known who Hung sent the email to, or when it was sent.

Mickael Damelincourt, the managing director of the hotel, has slammed the report as “total nonsense.” Damelincourt does not deny the email’s existence, but says that Hung was lying in the email to appear more important.

Upon his inauguration, President Trump claimed to have transferred his business into a trust managed by his sons. If the email Hung sent is proven true, it could confirm the President’s manipulation of the presidency to personally enrich himself and his family.

Last week, a Federal Judge threw out a lawsuit filed by Citizens for Responsibility and Ethics in Washington (CREW), which argued that Trump is in violation of the Emoluments Clause of the United States Constitution.

The Emoluments Clause forbids elected officials from receiving gifts from foreign governments without Congress’ approval. There has been ongoing speculation on whether foreign dignitaries paying to stay at Trump’s hotel properties could fall into this category.