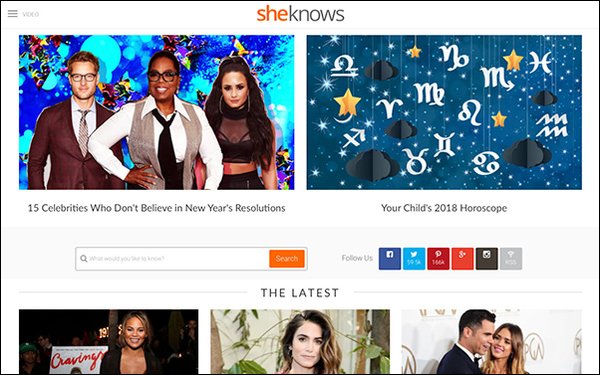 SheKnows Media, a woman’s health and lifestyle media company, comprised of four sites — SheKnows.com, BlogHer.com, HelloFlo.com and StyleCaster.com —  is in growth mode. In late December 2017, it hit 89 million unique visitors, per comScore, a 65% increase between September and November.

The digital media company credits its growth to its ad-tech offering, Boomerang, which identifies specific audiences from a demographic and psychographic perspective across thousands of websites. In addition, programmatic sales became its main source of revenue in fourth-quarter 2017.

In early 2018, SheKnows Media will integrate the HelloFlo website -- which won the 2017 Webby Award for Best Health Site -- and its popular “Learn From Her” platform into SheKnows.com.

The HelloFlo brand will remain as the site’s primary health content hub, addressing topics that range from reproductive health to de-stigmatizing mental illness.

However, SheKnows.com, BlogHer.com and StyleCaster will remain independent within the SheKnows Media brand portfolio.

"The BlogHer platform houses the 21,000-plus influencers with whom we work to publish branded and non-branded content to our sites. It also serves as the hub for information about our live event series," says Samantha Skey, president, SheKnows Media.

On the content front, Skey says the sites will roll out "exciting new tentpole packages that dive deep into specific topics (like fertility, postpartum depression, black women in the beauty industry, etc." SheKnows Media will continue to develop successful existing franchises like #HatchKids, a video workshop series that helps parents talk to their kids about pressing issues.

This spring, SKM will debut a new video series to complement its investment in women entrepreneurs via the Passion to Profit and #ThePitch tentpoles.