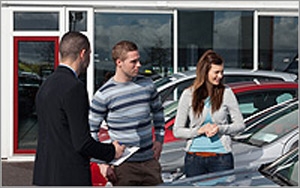 U.S. automotive sales were down for the first time since the financial crisis in 2009, but automakers still sold 17.2 million vehicles, despite the 1.8% dip.

The industry has passed the 17 million mark for three consecutive years, according to IHS Markit.

“This is the first time this has happened since the inception of the industry more than 100 years ago,” said Tom Libby, manager, loyalty and industry analysis, IHS Markit.

Although the annual number was down slightly, automakers finished out the year with strong December sales. Visits per dealership increased 3% month over month (from 6,512 to 6,691), but were down 2% year over year (from 6,818 to 6,691), according to Cox Automotive.

Mobile remains the preferred device of consumers, grabbing 57% of total visits to dealer websites, while desktop had the remaining 43%. Mobile increased 1% while desktop dropped 1% month over month. Search advertising CPC, at $3.67 continues to rise up 2% month over month for the 5th consecutive month, and up 12% year over year, according to Cox Automotive.

Any time the market passes 17 million units it’s a good year for the auto industry, though the real story in 2017 was the near wholesale death of the car, says Karl Brauer, executive editor, Autotrader and Kelley Blue Book.

“At Ford, for instance, every car model was down in 2017,” he says. “That was also true for Buick, Chevrolet, Chrysler and Dodge. Of Toyota’s 13 car models, 11 were down in 2017. Of Nissan’s 10 car offerings, seven were negative. Five of VW’s six car models were also down, and a similar story carried across nearly every luxury brand.”

Even Honda, despite the continued success of the Civic and launching an all-new Accord, couldn’t keep its overall car sales in positive territory last year.

“This is a paradigm shift in consumer behavior, and the fallout will be reflected over the next few years as automakers make hard choices regarding which model lines will live or die,” Brauer says. “The good news is truck and SUVs sales pretty much counter-balanced the drop in cars, and those models are almost always more profitable for automakers.”

Detroit’s Big Three have storied brands in Cadillac, Jeep, and Ford, but product and marketing missteps are taking a toll as the market contracts, says Rebecca Lindland, executive analyst for Kelley Blue Book.

“All boats rose the last few years, but now the tide is starting to recede and the seaworthiness of brands is being tested,” Lindland says. “It’s time for all makers to begin thinking more creatively about appealing to consumers. The products are there, but the messages are getting lost in the marketplace.”