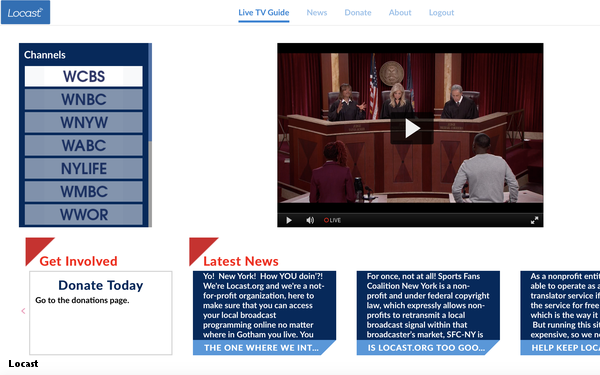 There's a new over-the-top streaming service in town, but this one has a twist: it's streaming over-the-air broadcast feeds of 13 New York City-area stations for free.

The streaming service, Locast (a combination of “local” and “broadcast”), aims to force a lawsuit from broadcast networks in which Locast's strategy passes legal muster.

Locast was created by a nonprofit organization called the Sports Fans Coalition. While it is free, Locast is asking for donations from users, to the tune of $10 per year, or $1.99 per month.

The SFC has been around since 2009, and advocates on behalf of fans on matters related to high ticket prices, restrictive rules for  ticket sales, and public funding of stadiums. It has also advocated for more access to sports on TV, and the Locast service is a continuation of that mission.

While Locast is a working streaming service, it really serves as a proof of concept. Only available to residents of the New York metro area, SFC’s David Goodfriend told Broadcasting & Cable that the plan is to take the broadcasters to court. The company’s legal strategy rests on its being a nonprofit entity that does not charge for use. Goodfriend believes such entities are permitted to stream local broadcast networks.

Of course, others have tried taking over-the-air broadcasts and streaming them (remember Aereo?), with courts ultimately shutting them down.

We’ll have to wait and see whether the nonprofit strategy works in court.