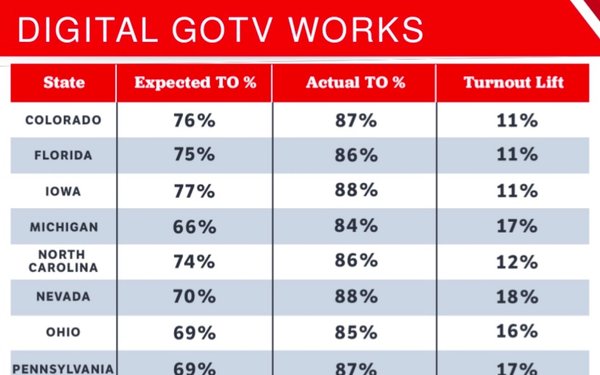 Can digital channels really drive turnout? Well, maybe enough to swing an election like 2016's reflects the RNC's Doug Hochberg, Chief Digital Officer. At last week's Marketing Politics in DC he ran the math on how turnout in key swing states was impacted by visits to their Vote.gop online tool in 2016. Once the voters registered at Vote.gop, they were subsequently pushed with emails and re-targeted with ads, in a consistent and holistic manner. After running a case study among a few target states, Hochberg’s team saw double-digit returns in turnout lift, which has clearly dispelled the notion that you can’t turnout an online voter. The effectiveness of the site has ultimately helped sway some of the swing states, like Pennsylvania that saw a 17% turnout lift.

Find the rest of this session, and more, at our Marketing: Politics Agenda Page