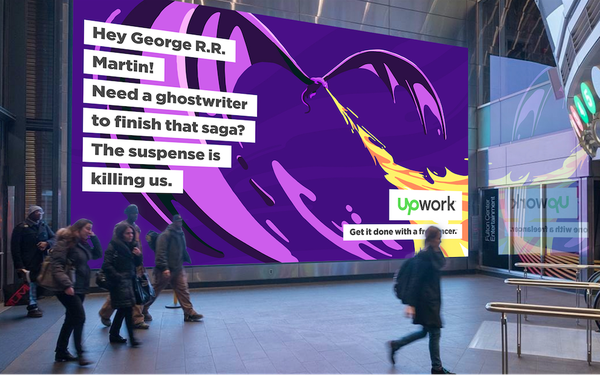 Upwork and its agency, Duncan Channon, are introducing a clever campaign that taps pop culture and current events to raise awareness for the freelance platform.

The "Hey World" creative is designed to transcend traditional B2B messaging through straight-forward questions, such as "Hey Mr. President? Need a social media strategist?" or "Hey The Rock? Need a website for that 2020 presidential run?"

“Our challenge was to find people, companies and stories that were of-the-moment, but also durable enough to still have relevance as the media buy draws to a close,” says Michael Lemme, chief creative officer, Duncan Channon. The selected roster includes “Trump, Games of Thrones” author George R.R. Martin, Equifax and NASA.

The multimillion-dollar ad campaign appears via out-of-home in New York, Chicago and San Francisco with additional markets in the coming months. “We focused on targeting high-performing markets across the U.S. with a heavy concentration of enterprise organizations," says Rich Pearson, senior vice president, marketing, Upwork.

This activation is supported with radio to "effectively enable the company to reach its target as they commute to and from work."

This is Upwork's first multi-city ad campaign with an agency. Previous Upwork campaigns were "test campaigns" that were much smaller in scope, says Pearson. Last year’s “Get More Done with Freelancers” campaign, to that end, was developed in-house with the help of freelancers sourced on Upwork to show a range of business scenarios where freelancers are “heroes” for the companies who use the platform.