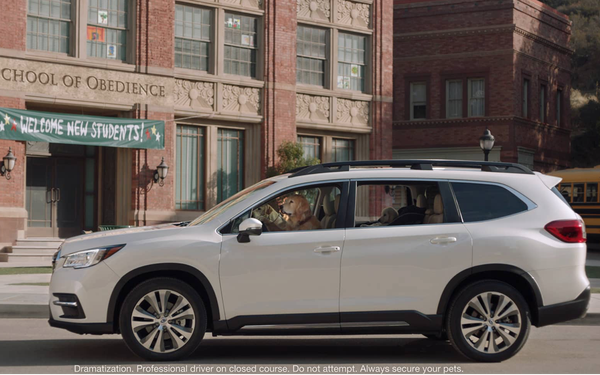 Although the automaker is not planning a Super Bowl spot this year, the brand will continue its sponsorship of the alternative tongue-in-cheek programming, the Puppy Bowl on Animal Planet, for the eighth consecutive year, says Brian Cavalucci, national advertising manager for Subaru of America.

The latest installment of the “Dog Tested. Dog Approved” campaign from Carmichael Lynch includes the Barkleys family of dogs, first introduced in 2009. The new spots pay tribute to the scenarios Subaru drivers find themselves in with their own families, while also showcasing the brand’s longstanding love of pets.

Subaru has been a sponsor of the SAG Awards for the last 14 years, and is also a supporter of the SAG-Aftra Foundation, Cavalucci says. Other sponsors of the SAG awards were United Airlines, Champagne Taittinger, L'Oréal Paris, Fiji Water and Dove Chocolate.

The media plan after the SAG Awards will carry out through the end of the quarter on networks such as AMC, Animal Planet, Comedy Central, Discovery, FX, HGTV, Nat Geo, SyFy, TNT and USA.

The Barkleys have long resonated with Subaru consumers, who consider pets to be a member of their family and “their copilot for all the adventures ahead,” Cavalucci says.

“We have a long-term commitment to pets and animal welfare, so the Barkley family has been a natural way for us all to bond over this shared-love of pets,” he says. “Plus, they’re fun and a bit of whimsy. We’ve all imagined what our pets ‘alter egos’ would be; the Barkleys is living that out loud.”

One spot features the Subaru Impreza, another the Crosstrek, while two feature the recently unveiled 2019 Subaru Ascent. “Drive Away,” shows the teenage Barkley having difficulty stopping the Crosstrek to pick up his canine Dad; “Drop Off,”  where the parents are dropping off their pup at obedience school; “Car Wash”  which shows a group of canines washing the Ascent; and “Driving Lesson,” where a group of geese distract the dog trying to learn to drive a Subaru Impreza.

“Subaru has a long-standing commitment to dogs and animal welfare — and we’ve been making dogs spots as a light-hearted representation of that,” Cavalucci says. “The Barkleys play in a pure entertainment space; they are meant to be fun and entertaining and to generate love for Subaru by connecting with our people on some of our dearest common ground."