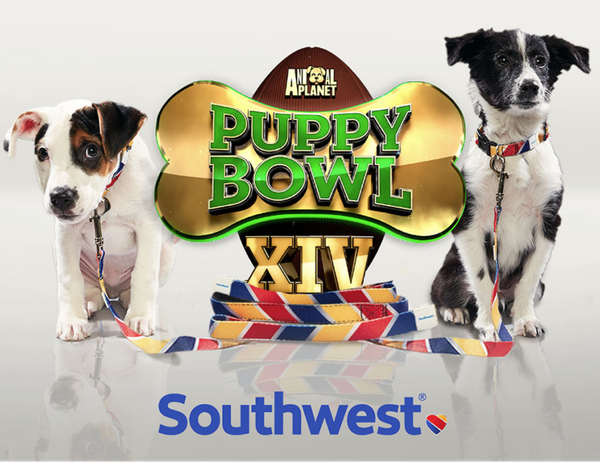 The brand is running ads to potential viewers, targeting consumers ages 24-54 who are dog lovers.

“This opportunity came to us from years of working with Discovery on Shark Week, Evans tells Marketing Daily. “We are leveraging this partnership with Animal Planet’s Puppy Bowl in order to insert Southwest into the culturally relevant Big Game conversation.”

This year is the second year that Southwest has partnered with Animal Planet for Puppy Bowl, but this year’s partnership is much bigger than last year’s, she says. Additionally, the brand advertises throughout the NFL season and sponsors various sports teams across the country, including the Denver Nuggets, Texas Rangers and Houston Rockets.

Southwest has used Facebook Live to great success in the past to celebrate, inform and recruit, Evans says.

“We’ve gone live from the tarmac, from inside hangars, and from our Network Operations Control which is the nucleus of our operation,” she says. “Facebook Live enables us to be more direct and genuine with customers and the media, and to celebrate the employees who do amazing things every day. Our viewership on Facebook Live has been much higher than other live platforms, and we’re looking forward to evolving with the product.”

There is a growing appetite for creating, posting and interacting with live videos on Facebook. Over the past year, daily watch time for Facebook Live broadcasts has grown by more than 4x. Live videos on average get six times as many interactions as regular videos, according to Facebook.