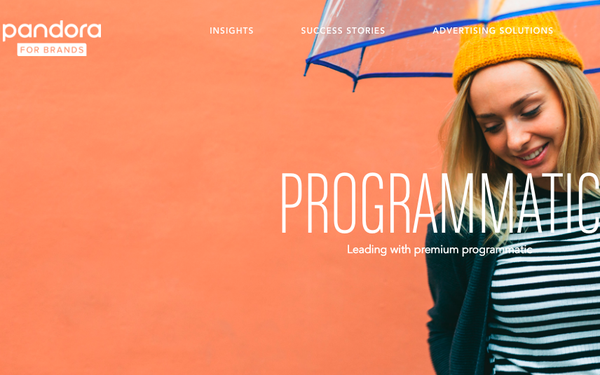 Pandora, the publicly traded music streaming service that helped define the medium by offering a sublime user listening experience, has announced plans to reorganize in a way that will optimize “business performance.”

Specifically, Pandora late Wednesday informed the press and investors that it is redesigning itself in a way that focuses on “ad tech and audience development,” a clear indication that it wants to cater more to Madison Avenue.

Pandora said the restructuring will create a “flatter structure for smarter, faster execution,” but did not elaborate on specifics other than that it would eliminate roles and save about "$45 million to adjusted EBITDA.

"The savings will be reinvested into growth initiatives including ad-tech, non-music content, device integration and marketing technology, toward which the company will redeploy existing employees and hire for new positions,” the company said.

"Pandora is the largest music streaming service in the U.S. People spend more time on Pandora than any other digital platform in the country, and as our dynamic industry evolves, we must also evolve,” CEO Roger Lynch said in a statement. “As I shared last quarter, we know where and how to invest in order to grow. We have an aggressive plan in place that includes strategic investments in our priorities: ad-tech, product, content, partnerships and marketing. I am confident these changes will enable us to drive revenue and listener growth."

Pandora also announced plans to expand its presence and workforce in Atlanta, providing a significant opportunity to add instrumental talent in a region with lower costs than the company’s headquarters in Oakland, California.