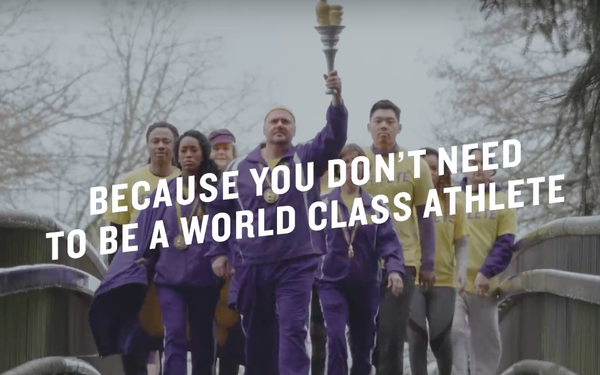 Not all Olympian athletes will be heading to South Korea this week. Specifically, those from Olympia, Wash., will be staying home.

Planet Fitness, which is decidedly not a sponsor of the 2018 Winter Olympics or Team USA, is celebrating athletes of all stripes in a new campaign that celebrates the people who work out at their facilities in Washington’s state capital.

With a new video, the brand sets out to reinforce its image as an “inclusive, accessible and affordable” fitness, says Jamie A. Medeiros, vice president of national marketing at Planet Fitness. “We love an opportunity to show our unique personality in the fitness category,” Medeiros tells Marketing Daily. “We believe that our members should be celebrated for their achievements, and that they are all athletes every day.”

The spot, from agency Hill Holliday, depicts real “Olympians” (again, those from Washington), working out at a Planet Fitness and marching through their hometown streets (at one point pausing at a crosswalk) to raise a “torch” (really, the brand's thumbs-up symbol) at the state capitol steps. Onscreen text notes, “You don’t have to be a world-class athlete to be celebrated like one.”

“The goal behind this campaign was to show that all of our members deserve to be celebrated, and that you don’t need to train 365 days a year to be considered an athlete,” Medeiros says. “All of our members should be honored and celebrated for their achievements, whether it be coming to the gym once a week or training for a 10k.”

The spot launched Monday on the brand’s web page as well as on its social media channels, and will be supported with paid posts and public relations efforts. The company is also selling shirts like those worn by the athletes in the video, “so that anyone can join Team PF,” Medeiros says.

“Depending on the reaction to this video, we may launch a second installment of the idea, continuing to focus on everyday Olympians (that is, people from Washington),” she says. “As a follow-up, we’ll be highlighting our sponsored Olympians, telling their true stories, digging deeper into who they are and why they’re the type of Olympian that’s right for Planet Fitness.”