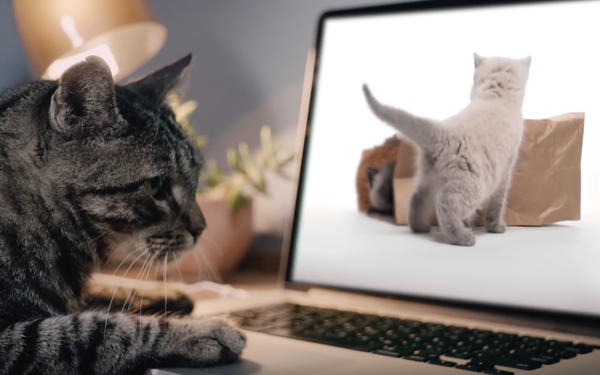 PetSafe is launching a sequel to its 2016 Catspiracy campaign to promote the ScoopFree Self-Cleaning Litter Box.

The hands-free device is so effective at keeping litter boxes fresh and clean that the cats of the world are convinced it is proof of a global conspiracy wherein humans harvest cat poop for profit, according to a campaign from Humanaut running online on YouTube and Facebook. The two-and-a-half-minute version already has more than a half million views on YouTube.

Catspiracy 2.0 picks up where the original campaign left off. With nearly 3 million views on YouTube, the video’s tagline summarizes the product from the kitties’s point of view: “ScoopFree: A high-tech robot machine that harvests your cat’s poop so you can sell it on the black turd market and make billions or even millions.”

“We saw such an overwhelmingly positive response to the first Catspiracy video,” says Humanaut Chief Creative Officer David Littlejohn. “People were actually asking in the comments to see the sequel.”

In a 15-second spot, a nervous feline narrator directs viewers to “Get the facts at Catspiracy.com.” In 30- and 90-second versions, the tabby and his paranoid pals expound upon their theories. Among them: Area 51 might actually be a real-life Area No. 2, the moon (aka “The Night Ball”) is likely a giant sub-zero storage facility for poop, and aliens are probably in on it, too.

“Ever wonder why the rich and powerful have always kept us close at hand?” wonders British Shorthair Cindy Clawford, as we see images of powerful humans Abraham Lincoln, George Washington and Henry VIII with feline companions.

Humanaut also created cheeky Catspiracy memes for PetSafe that will run on social media and the Catspiracy.com site, which will use early-internet design aesthetics — starry backgrounds and flashing, all caps gifs advising cats to "WAKE UP!”— as design cues to spoof real conspiracy theory sites.