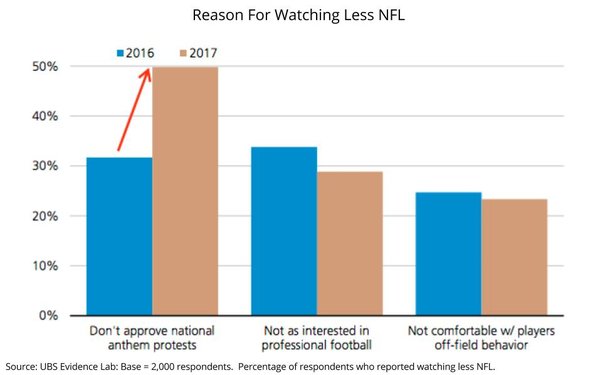 Many explanations have been given for the falloff in NFL ratings this season, including a backlash among fans to controversy surrounding players who protest by taking a knee during the National Anthem.  A nationally representative survey of Americans conducted by Wall Street equities firm UBS finds that, in fact, is the No. 1 reason cited by those who said they watched less NFL coverage this year.

The finding -- part of a survey of 2,000 U.S. consumers conducted by UBS as part of its “Evidence Lab” -- is self-reported, but among those saying they watched less NFL coverage, 50% said they “don’t approve of National Anthem protests.” That’s up from 30% who cited that reason when UBS conducted a similar survey a year ago.

The second-biggest reason was respondents saying they are not as interested in professional football, followed by the response that they are “not comfortable with players' off-field behavior."

The finding helps explain why NFL television ratings were off about 10% for the season that concluded with Sunday’s Super Bowl coverage.

It also shows the influence President Donald Trump likely had in taking a stand on players taking a knee in protest.

“It is unclear what the long term impact of the Anthem protests will be on NFL viewership,” the UBS analysts concluded in a research note sent to investors today. “It could be argued that this is a temporary headwind for the NFL, however the protests have already impacted two consecutive seasons. Additionally there is no guarantee that viewers who stop watching NFL games because of the protests would return if protests were to stop.” 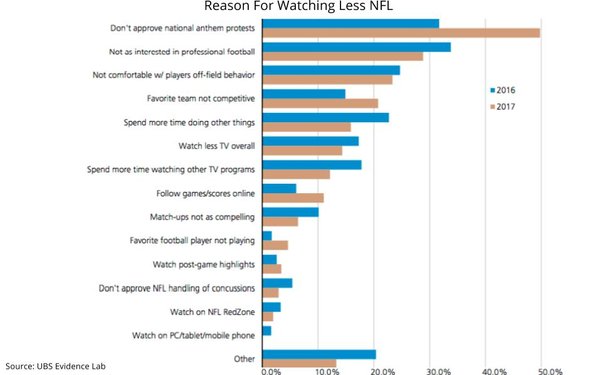