While the prevalence of ad-blockers continues to grow, the digital ad industry is fighting back, according to a new academic research paper that finds “anti-ad-blockers” have been deployed by publishers much more than previous research would indicate.

The paper,“Measuring and Disrupting Anti-Adblockers Using Differential Execution Analysis,” researched by graduate students and written by professors at the University of California, Riverside, will be presented later this month at a symposium in San Diego,.

But the top-line findings published in the university’s UCR Today outline the research, including multiple concurrent experiments -- a “differential execution analysis to automatically detect and analyze anti-ad blockers, collecting execution traces by visiting a website with, and then without, ad blockers to measure the different in-browser experiences.”

The research concludes that anti-ad-blockers are present on an “astonishing 30%” of the top 10,000 websites.

“This is up to 52 times more than reported in prior literature,” says UCR Professor Zhiyun Qian, one of the authors of the paper.

“We know that earlier research was limited to detecting visible reactions, such as warning messages and pop-ups, by anti-ad blockers,” he continues. “But our system can discover attempts to detect ad blockers even when there is no visible reaction, which happens in over 90% of cases.”

Quian said the industry’s bypassing of ad blockers increases prospects for the delivery of malware and “widespread tracking will come back to threaten the stability of digital interconnected systems.”

“The ad industry lacks self-regulation and all sorts of issues exist, such as malware delivered through ads, universal tracking, annoying ads and so on,” said Qian, an assistant professor in the computer science and engineering department, who previously worked for Microsoft and Cisco.

“Our research paper came out of work which was initially funded by the Data Transparency Lab, and now by the National Science Foundation, and its initial goal was simple: to learn more about the escalating arms race between ad blocker and anti-ad blockers,” he added. 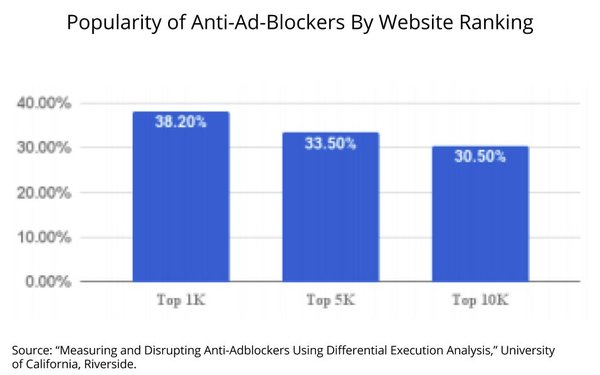