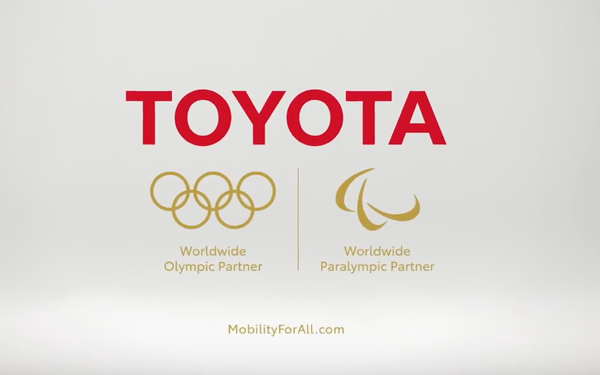 Toyota Motor North America has been introducing “Start Your Impossible,” a massive global marketing effort focusing on the Olympics Games with 10 spots running in 27 countries.

The way Toyota advertises its Paralympic partnership hasn’t been done before from a U.S. Olympic Committee perspective. It is the only brand to sponsor the Paralympics and Olympics equally

The Olympics is a “big deal” to the automaker because “it’s about the movement within the organization from being a car company to being a mobility company, mobility for all,” Laukes tells Marketing Daily.

“We believe that everybody has a right as human being to be able to move,” he says. “And that’s whether something as easy as getting out of bed in the morning to being able to go to the store, or to the doctor, or to wherever you need to go. We believe it’s a human right and we are going to evolve into that company that’s going to allow every human to be able to do that.”

The Olympics is a good place to broadcast that message because it’s a global platform, he says.

The Olympic Games are coming to Tokyo in 2020 and the company will continue its efforts there, he says.

“This is [Toyota Motor Co. President] Akio Toyoda’s vision around the Olympics and using that platform,” he says. “It’s a big deal for the company and also personally for Akio and his legacy and the Toyota legacy. The last time the Olympics were in Japan was when they introduced the Shinkansen [bullet train in 1964], and that revolutionized rail as we know it around the planet. So the pressure is on.”

Toyota broke its Olympics campaign during the Super Bowl with “Mobility Anthem,” “One Team,” and “Good Odds,” which highlights the story of Canadian Para alpine skier Lauren Woolstencroft, who overcame tremendous odds to become a legendary Paralympic gold medalist.

The campaign, from Saatchi & Sattchi and Dentsu, was over one year in the making, he says.

“It was a very strong and amazing journey watching two massive agencies that came together for the brand with zero resistance,” Laukes says. “It’s very refreshing.”  The “Let’s Go Places” was also a joint effort between the two agencies.

None of the Olympics advertising features product because it is being used globally and the only Toyota vehicle that is sold around the world is the Corolla, he says.

The two creative pillars of the multi-platform global campaign include “inspiration,” which celebrates the human spirit, and product “evidence,” showcasing Toyota’s ideas for innovations that can help people move freely.