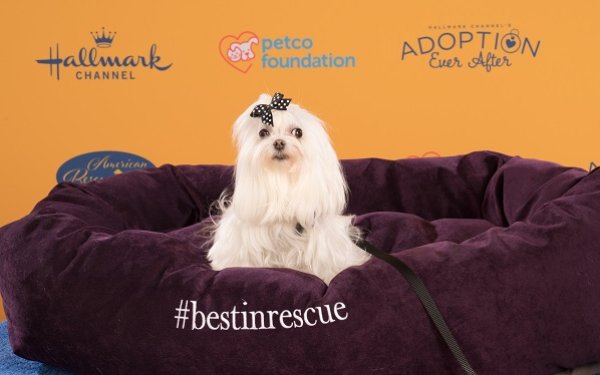 These truly are the dog days of winter.

No sooner were we done with the annual Westminster Kennel Club Dog Show last week on Fox Sports 1 than this new dog show from Hallmark Channel comes along to enliven Monday evening -- otherwise known as President’s Day Night.

While the Westminster show from Madison Square Garden represents the pinnacle of pedigreed pooch perfection, Hallmark Channel’s “2018 American Rescue Dog Show” is about the rest of the canine kingdom -- all the dogs we love, regardless of their imperfections and origins.

With this rescue-dog pageant, Hallmark Channel parent Crown Media Networks is once again successfully taking the pulse of its audience and concluding that dogs are in. By coincidence, this year happens to be the Year of the Dog on the Chinese lunar calendar, which started last Friday.

As almost everybody knows these days, rescue dogs are also in -- that is, dogs that are purchased or retrieved from pounds where they might otherwise meet their deaths.

In Hallmark Channel’s “Rescue Dog Show,” some of the dogs are purebred and some are not. They are all dogs who have been rescued and now live in loving homes.

There is a new respect today for the non-pedigreed pooch, so much so that I noticed during some of the coverage of Westminster last week that the word “mutts” has fallen out of common usage. In the place of “mutt,” the phrase “All-American dog” is being applied. That sounds much nicer (not that the dogs themselves know or care).

Purebreds featured in the show include Basset hounds, English bulldogs, Malteses, St. Bernards and others, along with mixed breeds. Competition categories include Best in Couch Potato, Best in Underbite, Best in Talking, Best in Snoring and Best in Fetcher.

The show even has an official mascot named Happy the Dog. This dog has its own Web page on HallmarkChannel.com on which his favorite activities are listed.

These include “curling up by a warm fire place for a long nap, playing fetch in the yard, scratches on top of the head, taking naps in the warm sun and learning new tricks … and snacks.” After reading this, I suddenly realized we both like the very same things!

“We are proud to honor rescue pets and raise awareness of how truly special these animals are,” said Bill Abbott, President and CEO, Crown Media Family Networks. “There are beautiful animals available at local shelters and we encourage our viewers to choose adoption through our pet programming, which is at the heart of our brand.”

The Petco Foundation is also a partner in Hallmark Channel’s “Rescue Dog Show,” providing $75,000 in non-profit grants to the winners. AdoptAPet.com will also be showcased throughout the show, Hallmark says.

Producers Michael Levitt and Jennifer Schultz, both animal advocates, have “joined forces to create a show that is both entertaining and heart-warming,” said a press release from Hallmark Channel. And who could argue with that?

Monday night’s “Rescue Dog Show” is the first of what will become an annual event for Hallmark Channel.