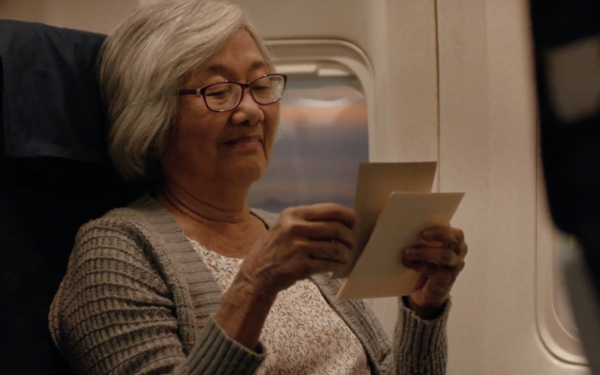 The company (along with agency BBDO) continues its mission of making its complex nature tangible with a new campaign that once again shows how its continued innovations touch people’s daily lives. “We’ve always worked to show who, what and where GE does what they do,” Michael Aimette, executive creative director at BBDO New York, tells Marketing Daily. “But we thought now was a good time to show why they do what they do. Their higher purpose. And that’s to create personal outcomes that are meaningful to us.”

The campaign, which begins airing this week, carries the theme, “What matters,” and expresses how the company’s aviation, healthcare and power innovations affect three lives. The spot begins with a boy in a developing nation heading to school while a voiceover says, “It doesn’t matter to him that you power a third of the planet.” The scene cuts to a woman on an airplane. “And she doesn’t care that a plane powered by our technology takes off every two seconds,” the voiceover says, as the scene cuts to a woman looking over her newborn premature baby.

“And she isn’t impressed that we span three centuries of invention.” As the visuals intercut these stories, the voiceover explains that what matters to these people is visiting grandchildren, taking a newborn home and doing homework at night with the aid of a lightbulb. "Technology is how we do things," concludes on-screen text. "People are why we do things."

“The creative team of Fred Kovey and Eric Goldstein found a great tension in pointing out that people — all of us — probably aren’t very interested in how GE does what they do,” Aimette says. “What we do care about is how all their amazing innovations make a difference in our lives. So that became the story: tangible, real outcomes.”

In addition to the longer anthemic spot, GE breaks down each character to tell their individual stories in separate spots.

The effort is breaking during the Olympics to not only take advantage of the live audience, but also because the competition presents an opportunity for “parallel messaging,” Aimette says. “What GE does is more than just make innovative products. And what Olympians achieve often stands for a higher purpose too,” he says. “Best of all, it’s a reminder and ‘thank you’ to GE employees for all that they’re doing.”