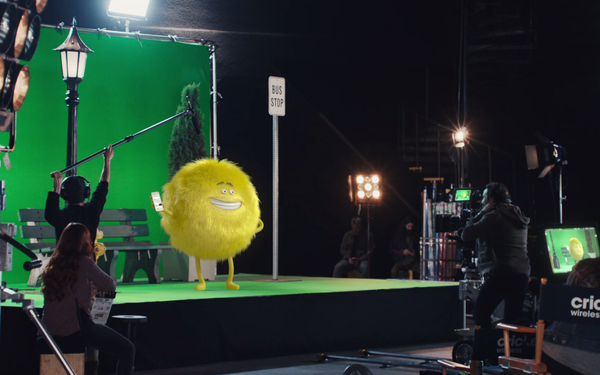 For nearly four years, Cricket Wireless has been represented itself in its advertising through adorable creatures who venture around their world silently happy because of their wireless carrier. This week, Cricket is bringing them out from behind the scenes, and giving them a voice.

The first spot breaks on Friday, with a commercial showing one of the characters filming a new commercial. In the spot, the cuddly character is given direction on a line reading for the commercial, which he gamely accepts. Other ads in the campaign will show the characters in other behind the scenes scenarios, each with their own distinct personalities.

“We knew making the characters relatable would work for us. Giving them adult personalities and voices will add an additional layer [to our message],” Cindy Rozier, associate vice president of marketing management for Cricket Wireless, tells Marketing Daily. “We try to cover the gamut [of personalities], so everyone can see themselves in the characters.”

The campaign also introduces a new tagline, “Smile, you’re on Cricket,” (with a smiley face emoji), which is a slight alteration from “Something to smile about.” The switch, Rozier says, gives the brand a more active voice.

“When we thought about the new evolution of our campaign, we challenged our tagline too,” Rozier says. “It’s rooted in the idea that a carrier should make you smile. And it’s branded.”

The cute characters have been a boon for Cricket (which is owned by AT&T), having increased its unaided brand awareness by 12 points since the campaign’s launch in 2014. But as the wireless industry is evolving — and consumers are looking to pre-paid wireless plans as a less expensive alternative with little sacrifice in quality — it’s important to switch from brand awareness to brand consideration, Rozier says.

“When the ad campaign was first developed, it was create to have distinction in the category. We wanted to have positive distinction in a negative category,” Rozier says. “As we thought about our category and how it’s become commoditized we wanted to be sure we were still distinctive.”

While this campaign will appear across broadcast, out-of-home, digital, social and radio, Cricket will continue to bring smiles in different forms on different channels as well. As the company has expanded its “something to smile about” platform, it has used guerrilla videos (of a lemonade stand bringing happiness or surprising WWE star John Cena with a number of fans, for instance) to convey its message. Rozier says those efforts will continue, and may incorporate the newly vocal characters.

“Everything about our brand is about making people smile, and in different channels, that relationship is different,” Rozier says. “We’re going to continue doing those [guerrilla] things, and we’re already thinking about things like having our WWE athletes interacting with our characters.”