Kimpton Has That H.U.M.A.N Touch 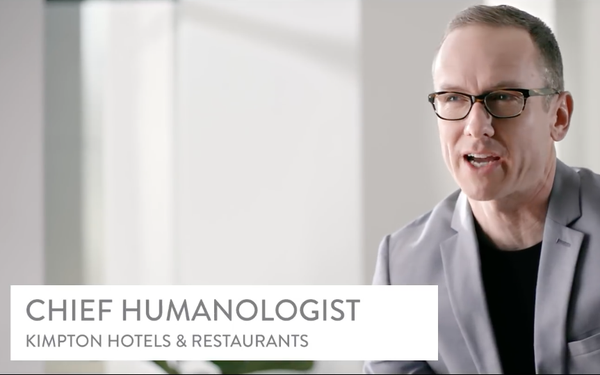 For all the benefits of technology, there’s nothing that truly replaces the human touch.

Hospitality brand Kimpton Hotels & Restaurants is emphasizing its personal approach by unveiling its human-powered operating system. The new film is part of the brand’s first-ever advertising campaign, built around the idea of “Stay Human.”

“In this fast-paced world of innovation and technology we can easily move through life and bypass human connections. Travel is no different. The whole spirit of travel is to open yourself up to meeting new people and seek out unique experiences,” Kathleen Reidenbach, chief commercial officer at Kimpton, tells Marketing Daily. “Our ‘Stay Human’ campaign is grounded in the notion that we may have access to more, but that leaves us craving more human connections, personal experiences and surprises.”

The campaign begins this week with a new video created by agency Circus Maximus. In the new video, the company unveils its “H.U.M.A.N.S” operating system, which features the brand’s “chief humanologist” (not a real title) explaining the brand’s latest technological disruption. “Since our inception, Kimpton has run on a very unique operating system,” he says. “We call it … humans.” The film then moves on to testimonials from Kimpton employees explaining how they can express empathy or literally giving a guest the blazer off her back. “An algorithm can’t do that,” the employee says.

“We recognize that technology that’s thoughtfully deployed can enhance the guest experience,” Reidenbach says. “However, with all this new technology, data and processes, it’s really the people who create memorable stays and experiences. No robot or computer program can replace individuals who are empowered to act in the moment and lead with heart and intuition.”

Reidenbach notes, however, that the brand isn’t taking an “anti-technology stance.” Technology, she says, helps fuel the online searches and bookings for many Kimpton properties, and lays the groundwork for the connections the brand has with its clients.

“This campaign is a reaction to the growing sentiment that while technology has its benefits, it’s not a substitute for human to human interaction," she says. “We are selective about how we apply technology to enhance and improve human connections, rather than take away from them.”

The “Stay Human” campaign will continue through 2018 with elements involving on-property experiential touchpoints, as well as video and social content, Reidenbach says.