String Theories: We're Living In Cass Sunstein's World, Get Used To It 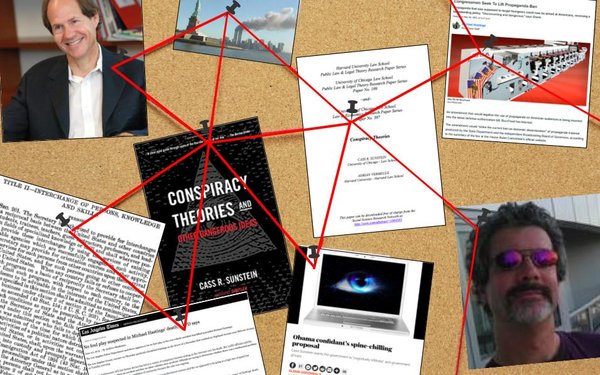 How did America become a nation of conspiracy theorists? It can’t only be because, as my grandmother liked to say, "the fish stinks from the head down."

Most of you are late to the party, but that’s OK. It’s not even close to full swing yet.

2016 was the icebreaker; in 2017, the music got started. Now it’s looking like 2018 will be when things really start to get crazy, with lampshades on heads, expensive stuff getting broken, and somebody probably ending up dead.

Whether you’re on the left, endlessly digging into how the Russians “hacked” the last election, or on the right, persistently pushing the idea Seth Rich leaked DNC emails and got killed for it, we’ve got a paradoxical, polarizing, paranoid conspiracy theory for you!

In fact, there are thousands of them.

To make matters worse, lots of the old, crazy conspiracy theories are now coming to light as being, well, not so crazy. For years, the existence of the Bilderberg Group was a much-mocked conspiracy theory; nowadays, The Guardian has a dedicated reporter covering it.

The bizarre skin disease Morgellons Syndrome was considered a psychosomatic condition (at best) until recently, when Joni Mitchell got it and suddenly it was a real thing. The entire Vietnam War escalation, based on the Gulf of Tonkin Incident, was a lie — under naval forces commanded by The Doors’ Jim Morrison’s dad, no less.

From The New York Times front-paging a story about the existence  of UFOs to Hollywood’s most powerful mogul hiring ex-Mossad agents to spy on his many enemies, it’s getting harder to tell Truth from “truth,” selective truth and outright lies.

Because along with the weird truths, we’re also getting a resurgence in old, even primitive, lies. Flat earth is big again. Trump’s not a fool, but a Manchurian candidate. The Clintons kill everybody.

If you don’t know who Cass Sunstein is, you should.

Sunstein is one of the great propagandists of modern history. And the embrace of his political philosophy for mass communications management of an increasingly diverse and disgruntled society is one big reason things are so fucked up in the country and the media.

A Harvard grad, Sunstein was one of President Barack Obama’s favorite spooks, whether a clandestine one or just in spirit. Sunstein was placed in charge of the Obama administration’s Office of Information and Regulatory Affairs, and his analysis and advice for controlling an increasingly unwieldy and untrusting citizenry and electorate has apparently been embraced as the overarching communications strategy of the U.S. government.

Sunstein, who is married to former U.S. Ambassador to the UN Samantha Power, first shared his philosophies for societal management and control in a 2008 Harvard white paper, co-authored with Adrian Vermeule, called “Conspiracy Theories.”

The 30-page white paper discusses possible government responses to the rising tide of conspiratorial thinking — particularly in relation to the 9/11 attacks and the increasing chatter it was an “inside job.”

The white paper notes several potential approaches to conspiratorial analysis and the risks associated with each.

Sunstein and Vermeule conclude "the best response consists in cognitive infiltration” of the conspiracy community, as "Government agents (and their allies) might enter chat rooms, online social networks, or even real-space groups and attempt to undermine percolating conspiracy theories by raising doubts about their factual premises, causal logic or implications for political action.”

Sunstein and Vermeule set out five hypothetical responses a government can take toward conspiracy theories:

The writers note that each strategy “has a distinctive set of potential effects, or costs and benefits…. [O]ur main policy idea is that government should engage in cognitive infiltration of the groups that produce conspiracy theories, which involves a mix of” the three final points, above. [emphasis added]

Sunstein and Vermeule’s white paper also recommends recruiting "nongovernmental officials,” who will covertly be “suppl[ied] with information and prod[ded] into action from behind the scenes,” while warning how "too close a connection will be self-defeating if it is exposed.”

Of course, this is exactly how state-sanctioned propaganda works, and it was noted as such by Glenn Greenwald, who in 2010 was the first to sound the trumpet on Sunstein in Salon.

As Greenwald notes in his piece, what Sunstein advocated at the time was illegal, thanks to the Smith-Mundt Act of 1948 and Foreign Relations Authorization Act in 1987. But Greenwald also notes that Sunstein is tight with Obama, and people need to be vigilant to make sure it stays illegal.

However, it didn’t. Few were vigilant, and one who was vigilant ended up dead.

When Congress inserted a last-minute amendment into the May, 2012 defense authorization bill to “strike the current ban on domestic dissemination” of propaganda, spiking both Smith-Mundt and the Foreign Relations Authorization Act in one swift, felled swoop, the late, great investigative reporter Michael Hastings was leaked the info beforehand, and he reported it in BuzzFeed.

Didn’t matter. The amendment was successfully inserted into the defense authorization bill and passed. Since then, the media—both corporate and social media—has degenerated into a crazy, cacophonous circus sideshow.

So keep this in mind: Propaganda is now legal. Nothing you read, watch or pay to see in a movie theater should be taken at face value—though sometimes it is totally true!

The object is to keep you confused, off-balance and unsure.

It seems to be working.

commentary, government, media, politics
1 comment about "String Theories: We're Living In Cass Sunstein's World, Get Used To It".
Check to receive email when comments are posted.
Next story loading