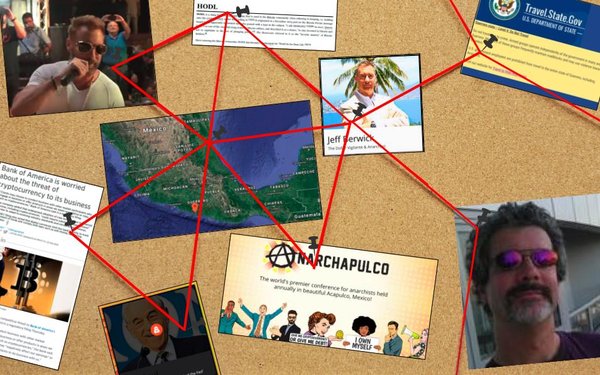 Last week, I attended Anarchapulco, the annual anarchists conference, with 1,500+ other people from around the world. 2017's conference attracted 500 people, so you can see how this is trending.

It took place in Acapulco, Mexico, a region which on January 11 got placed on the State Department's Level Four "Do Not Travel" list. That's right about the time Anarchapulco sold out, tripling its attendance from last year.

I walked around Acapulco freely, often eschewing taxis, and never felt unsafe. The people were incredibly friendly and welcoming. I'll also note that there were a ton of military and private security guys everywhere with semi-automatic weaponry.

The State Dept. warning versus the reality of life on the ground was interesting, but it was nothing compared to what I learned about the Civil War that's raging in the cryptocurrency community, which has massive real-life implications for the world of global finance.

One of the big draws — unbeknownst to me before I got there — was that Anarchapulco was supposed to be the mano-a-mano showdown between the bitcoin and the bitcoin cash adherents.

Apparently, all the early anarchist bitcoin supporters split off (or "forked") into bitcoin cash because they didn't like the way bitcoin was being hijacked by a shady crew — called the “Crypto Creeps,” including our old pal Brock Pierce — who seem determined to turn the cryptocurrency from a currency into a commodity.

You can see this most recently in the linguistic programming and branding, as bitcoin is now being positioned as "digital gold," which is most emphatically not what it was created for and not what it's supposed to be.

Bitcoin and cryptocurrency were created as a global, decentralized replacement for "fiat money" (a popular term, said with universal disgust, at the conference) that would supplant the shadowy, insider-friendly-only world of global finance and banking.

Repositioning bitcoin and other crypto currencies as an investment strategy, not a currency, bottles it up for "HODL"types — another newly minted term that has helped program the public into thinking bitcoin should be an investment, not a currency. That's causing frustration among the early adapters and leading to the bitcoin-cash fork.

In addition, since the fork, bitcoin has added increasingly onerous transaction fees, which have also been a catalyst to turn bitcoin from currency to commodity. Investor and financial blogger Jeff Berwick said when he tried to cash out $35K in bitcoin recently, it would cost him more than $3,000 in transaction fees. If you want to buy a cup of coffee, you might pay more for the transaction fee than the coffee.

Your coffee might be cold — or even evaporated — by the time it's paid for, too. Bitcoin’s biggest supporters have refused to broaden the capacity of the blockchain that supports it, causing slowwwww transaction times, sometimes hours or even a day (or more).

Several people pointed this out in presentations, including Berwick, often adding statements like:"I don't know whether this was by [design/conspiracy] or [stupidity/incompetence], but it's set the cryptocurrency movement back years.”

There is also a full-fledged censorship and propaganda campaign to keep people from knowing what is going on.

One of the primary places to stay abreast of the latest cryptocurrency news was Reddit's r/bitcoin subreddit, but according to numerous Anarchapulco attendees and speakers (including Berwick and Roger Ver), the moderators of r/bitcoin have been compromised and corrupted. Any reasonable discussion of bitcoin vs. bitcoin cash is immediately deleted, as are comments in subreddit threads.

The corporate media pays no attention to any of this, other than to primarily focus on bitcoin as a commodity, and help the pump/dump crew. Mainstream media reporters who cover the cryptocurrency space were either mocked or held in contempt by everyone I spoke with.

Thus, one promise of Anarchapulco was debate and dueling presentations between the bitcoin and bitcoin cash crews. But here's what happened: None of the bitcoin people showed up.

One of them, Bruce Fenton, was even granted the hallowed closing presentation at the entire event — and he still didn't show! There were multiple bitcoin people invited to speak. All of them canceled. Their spots were filled by others, who basically shredded them from the stage.

I was particularly disappointed Fenton didn’t show, because he was the prior chairman of the Bitcoin Foundation, and the primary supporter of its current chairman, the controversial Brock Pierce, even in the face of defection of foundation membership. I wanted to ask Fenton about that.

My takeaway is that the global finance types are late to the crypto game and underestimated how quickly it would take off.

They are now involved and assaulting it on all fronts — infiltrating it with their own people, trying to control the conversation and language as it relates to the space, attempting to turn it from digital currency to HODL commodity.

Conversely, there is a lot of new money being made by young idealists, libertarians and anti-government types. People who became politically aware via Ron Paul, and to a lesser extent Bernie Sanders. They became aware of how corrupt the system is during both men’s media-and-establishment compromised primary runs.

This fresh breed of nouveau riche are not naive, and they are not foolish. They see what is happening with bitcoin, see its original purpose being perverted, and are adapting by splintering crypto from bitcoin into numerous “alt-coins.” You can see this, as bitcoin’s percentage of the entirety of cryptocurrency has fallen from roughly 85% to 36% in the past two years.

Now, some of these "alt-coins" are also con games, run by charlatans and thieves. But some of them serve real purpose — and are seeking higher motivation. DASH (digital cash), for example, just put up $5 million for investigative reporter Ben Swann to go fully independent, and is seeking other opportunities for investment to propel the movement.

The battle raging at the moment is between the idealists on one side and the common crooks and flat-out horrors on the other. The amount of information getting out to the public is misleading and limited. There is real opportunity for revolution here, and the good guys are still ahead — but the bad guys seem to be catching up fast.

If you think I’m overstating the potential of cryptocurrency, just look at the SEC filing from Bank of America that dropped Friday, which has the enormous financial-services company acknowledging cryptocurrency is a serious threat to its entire business model.

More people need to become aware of what cryptocurrency has to offer, because if the global finance types win this battle, we're pretty much talking financial panopticon, like what we’re seeing in China with its “Social Credit” system.

But that’s a dystopian future to be discussed another day.