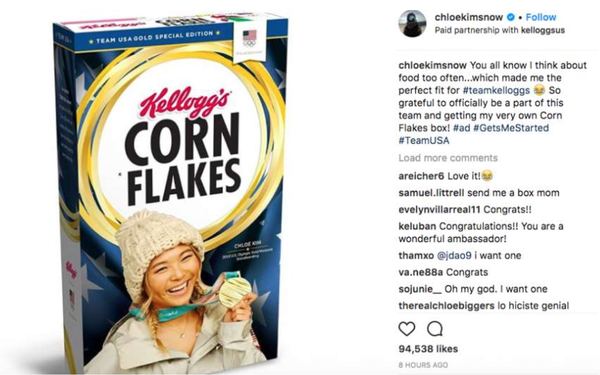 Team USA partner Smucker's gained the most advertising awareness among adults 18 and over of any Winter Olympics partner, according to YouGov BrandIndex.

Smucker's, which had a series of peanut butter and jelly sandwich-themed ads and promotions with Jif, increased its ad awareness score by 12 percentage points. The brand rose from 10% of adults 18 and over having seen one of their ads in the past two weeks when the Olympics began to 22% by the time it was over, according to the YouGov BrandIndex.

Kellogg made the fourth biggest gains in ad awareness but was tops in buzz and word of mouth, likely due to backing athletes who turned out to be high profile. Buzz scores are based on responses to "If you've heard anything about the brand in the last two weeks, through advertising, news or word of mouth, was it positive or negative?” Word of mouth measures response to "Which of the following brands have you talked about with friends and family in the past two weeks — whether in person, online or through social media?”

Of the global Olympics partners, Samsung dominated in all three metrics: ad awareness, buzz and word of mouth. Besides a highly visible presence in PyeongChang’s Winter Village with its electronics and VR demonstrations, it received noticed for its “Do What You Can’t” TV campaign.

Both Toyota and Panasonic made strong gains, although ad awareness was considerably weaker for global partners than Team USA brands. Only four registered gains throughout the tournament: Panasonic, Samsung, Toyota and Bridgestone.