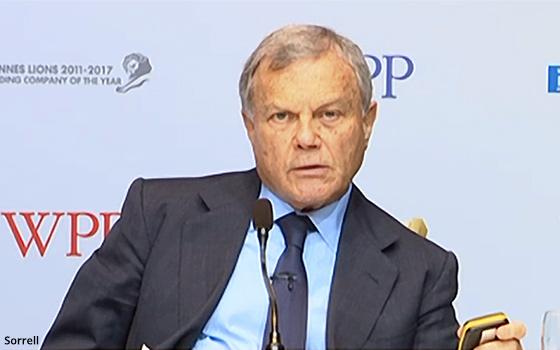 “I think it is very difficult to merge back creative agencies with media agencies to that extent,” WPP Chairman-CEO Martin Sorrell said during a quarterly presentation to investors Thursday, “because there will always be an argument about who’s in control.”

Sorrell’s comment -- which was made when Pivotal Research Group analyst Brian Wieser asked him to react to comments this week by P&G Global Marketing & Brand Growth Officer Marc Pritchard at the Association of National Advertisers’ annual media conference -- reveals the power that media services agencies have gained in the decades since holding companies unbundled media from creative.

Sorrell acknowledged that “ironically, we may have come full circle again,” but maintained that in the near term it is up to the holding company -- not its media, creative and other specialized operating units -- to reintegrate the process for its clients.

“Ultimately, it may be different,” Sorrell said, alluding that there may one day be a more formal structural integration, but repeating the power and control issues that would ensue.

“The argument will always be who leads that team and where should it come from,” he said, adding: “Over the last few years, the answer to that question was no longer traditional creative.”

He noted that WPP and the rest of the industry have come a long way from the days when J. Walter Thompson or Young & Rubicam offered a “whole egg,” or integrated solution, and that the unbundling of all services -- not just media, but “data” and “PR” have led to a new renaissance in strategic and creative thinking that is benefiting clients in new ways.

“Some of the things we’re seeing coming out of PR agencies in terms of digital content development on a 24-7 basis is really critical,” he noted.