CarGurus Gives Shoppers 'Everything You Need To Know' 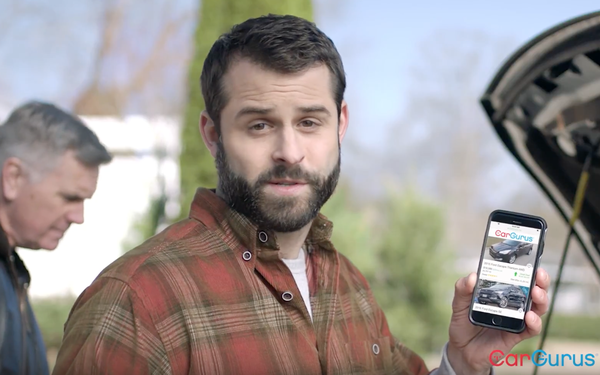 Online automotive marketplace CarGurus is launching a brand campaign that reassures vehicle shoppers that they don’t have to be car experts, thanks to the company.

The brand’s second mass-media campaign, “Everything You Need to Know,” includes three 30-second TV spots that will air on broadcast and cable television concurrent to national YouTube, Facebook and digital marketing campaigns.

“We still have significant opportunity to grow awareness for CarGurus but are shifting our focus to helping consumers begin to understand some of the many unique benefits of shopping on CarGurus,” she says.

“Hood,” “Emma” and “Lit,” share the tagline “you don’t need to know much about cars to know everything about a car.” The spots, breaking this week, were designed to show that while not everybody is a car expert, CarGurus makes it fast and easy for consumers to make the most informed car shopping decisions and find great deals from top-rated local dealers.

The campaign will run across a wide variety of programming. “Live sports will be an area of focus as it has performed well for us in the past, but you’ll also see us on news and entertainment-oriented networks,” Welch says. The spots will run through the rest of the year.

“Our core audience is men with a skew towards tech-savvy Millennials,” Welch tells Marketing Daily. “But one insight from our first campaign was that we did quite well on some more female-oriented networks and that women who visit our site are actually more likely to convert. We’ve taken those insights and developed a suite of spots with diverse appeal — a father and adult son, a mixed gender group of co-workers and an uncle of teens.”

The campaign draws attention to key differentiators for CarGurus versus other car shopping sites. The spots highlight that CarGurus has more inventory than any other major U.S. car shopping site, gives cars a deal rating and sorts the best deals first.

Based on last year’s successful results, CarGurus used the same team for the development of the  new campaign, partnering with advertising agency Plum14 and director Nick Spooner of Prism and Chirp Films for development and production. Additionally, Ocean Media will again manage the media planning.

“We used humor in our spots, but balanced that with some education on some of our key differentiators from other auto shopping sites, like the fact that we have more listings than any other major site, give listings a deal rating and sort the best deals first to make it fast and easy for consumers to find great deals from top-rated dealers,” Welch says. “In the world of DVRs, commercials need to entertain as well as educate to gain attention from consumers. We believe we’ve struck a nice balance between the two."