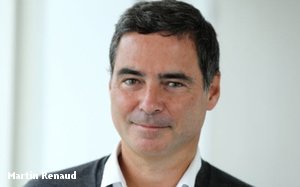 Looking to get closer to consumers and enable speedier response to trends in its far-flung markets, Mondelez International is moving away from its traditional, centralized marketing structure in favor of four regional consumer marketing officers reporting to a global CMO.

The company has named Martin Renaud, 50, to the global CMO role.

Renaud has nearly three decades of experience in marketing and general management positions in Asia Pacific, Europe, Latin America and North America. Most recently, he served as president, Fresh Dairy for Europe at Danone. He was also the company’s executive sponsor of brands and digital, responsible for leading organizational design, capabilities, media and marketing services and digital. He will be based in Mondelez's East Hanover, New Jersey office.

“Investing in a new regional CMO model will not only bring deep expertise to our marketing practice, but also increase connection and collaboration between our global CMO, our P&L leaders and the global team,” stated Chief Growth Officer Tim Cofer. “This new structure will change the trajectory of our marketing function,” enabling the company to drive growth by moving “at the speed of our consumer.”

Renaud’s “extensive commercial, strategy and digital experience” will be "a tremendous asset as we reinvent our marketing in a rapidly changing global consumer landscape,” Cofer added.

The choices for the newly established regional CMO roles:

* For Mondelez's North American region, Jason Levine has been promoted from vice president, marketing, North America Biscuits, having served in various marketing roles at Mondelez over nearly two decades in the U.S., Europe and emerging markets.

* For Europe, Debora Koyama is joining Mondelez from AB-InBev, where she was global marketing vice president for Stella Artois and Craft. Koyama has 25 years of experience in various marketing leadership roles, working for AB-InBev, L'Oreal, Kraft Foods and Diageo, leading teams in the U.S., Brazil, Latin America, Europe and at global level.

* For Latin America, Maria Mujica is being promoted from her most recent position as Mondelez's director of strategy and communications, Latin America. Mujica, who has been with the company for more than 20 years, pioneered its Fly Garage, an innovation incubator aimed at piloting "breakthrough connections" between brands and consumers to drive growth.

* For Asia, Middle East and Africa, Mondelez has hired Mie-Leng Wong. Wong’s 20 years of marketing experience has included leadership roles at Unilever and Heineken, at both global and regional levels across Europe and Asia Pacific.

The significant marketing reorganization comes at a challenging time for Mondelez — and all food CPG makers — as they scramble to adapt and jumpstart growth against the headwinds of consumers’ shift away from packaged goods, toward fresh, “clean” food and beverages.

Kraft’s profitability improved last year as a result of ongoing organizational streamlining and cost reductions, but its organic sales growth slowed to 0.9%, from 1.3% in fiscal 2016, as a result of a 2.4% decline in net sales in North America (sales increased in all other regions).

Some analysts have posited that Mondelez will be vulnerable to a takeover bid — possibly by Kraft Heinz — unless it steps up its growth, perhaps by acquiring companies with product profiles embraced by today’s consumers. (It’s time for Mondelez to “eat or be eaten,” Bloomberg columnist Sarah Halzack asserted last month.)

When Dirk Van de Put replaced longtime CEO Irene Rosenfeld last November, it was widely observed that, given the North American sales challenges, he was likely to focus on international, and emerging markets in particular — the regions presenting promising growth opportunities for “Power Brands” like Oreo, BelVita biscuits, Cadbury, Milka and Trident.

"We're taking a fresh approach — challinging existing thinking and exploring new ideas and ways to win," Van de Put said at last month’s Consumer Analyst Group of New York (CAGNY) conference. “More than ever, the consumer needs to be at the center of what we do.  Today's consumers eat differently, shop differently and seek different experiences. Since consumers are changing fast, we have to be more nimble, innovative and forward-looking than ever before."