Cigna Brings Back TV Doctors In 'Page A TV Doc' 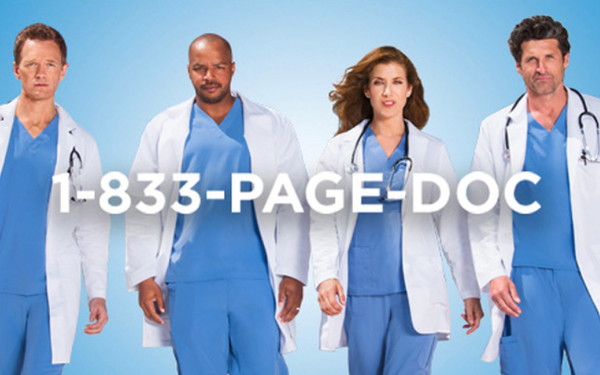 For those of us still lamenting the death of Dr. Derek “McDreamy” Shepherd on “Grey’s Anatomy,” never fear: He’s back from the dead and once again starring alongside other TV docs in a new effort from Cigna.

The new initiative aims to connect people directly with their favorite TV doctors. Developed in partnership with McCann, “Page A TV Doc” will use a series of digital, social and out-of-home placements to encourage people to call or text 1-833-PAGE-DOC to hear a message from the TV doctors about the importance of preventive care while supporting Cigna’s “Go. Know. Take Control” message.

Users who opt into the program will receive a callback from one of the TV doctors reminding them to schedule their annual check-up 30 days after the initial call. If the user misses the call, the TV doctors leave voicemails and also know how to send text messages.

Cigna’s mission is to help save thousands of lives each year by encouraging Americans to prioritize preventive care, says Stephen Cassell, vice president of global branding at Cigna.

“Scheduling an annual check-up is an important way to stay healthy and Patrick, Neil, Kate and Donald are all powerful champions of this potentially life-saving message,” Cassell says in a release.

The Centers for Disease Control and Prevention estimates that 100,000 lives could be saved if everyone got the recommended preventive care they need which often starts with seeing a doctor for an annual check-up. However, Americans use preventive services at only about half the recommended ratedespite their being covered by most health insurance plans.

This program encourages Americans to schedule their annual check-up and know their four health numbers, including blood pressure, cholesterol, blood sugar and body mass index. These numbers are responsible for the majority of preventable chronic disease and are the main drivers of health care costs, according to Cigna.