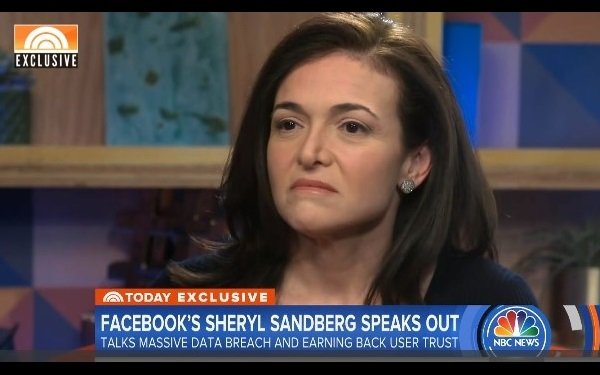 There, I said it. And while it is never nice to be this blunt-spoken in a piece of published criticism, it is nevertheless a true, accurate way of describing the reaction it was possible to have while watching two TV interviews she did last week.

The Facebook COO and “Lean In” heroine was in full damage-control mode in the two interviews -- one on Thursday evening with Judy Woodruff on “PBS NewsHour” and the other on Friday morning with Savannah Guthrie on “The Today Show” on NBC.

What was so off-putting about her? It was a combination of elements, including the way she applied various phrases in an attempt to “soften” her interviewers’ questions -- phrases that p.r. pros insist will help generate sympathy for the newsmaker in the hot seat who utters them.

However, they often have the opposite effect. The phrases make their speakers come across as stilted, rehearsed and anything but sincere.

That was another feature of Sandberg on TV that was possible to discern (whether rightly or wrongly) -- that in reality, she couldn't have cared less about the data scandal enveloping Facebook at the moment and she resented having to answer questions about it from these newswomen.

You could almost detect her thinking: How dare they question me! Don't these women know who I am?

One gets the impression that Sandberg goes through life absorbing applause, awe and accolades everywhere she goes. So when she is confronted with very hard questions by the likes of Savannah Guthrie, she does not really know how to handle it.

So she rehearses various answers to potential questions, and in the process, comes across like a robot.

The primary trope she adopted for these interviews was the “I'm glad you asked that question” tactic.

“Can you have something that's a community and a commercial venture at the same time, with people profiting off that information”? Woodruff asked her.

“We believe very deeply in our advertising model because just like TV, it's what enables us to make this product available to people all around the world for free,” Sandberg said. “Two billion people use the product. If we were not advertiser-based, most of those people would not be able to.”

Likening Facebook to advertiser-supported TV has more holes in it than Swiss cheese, but we'll save that for another column.

The other strategy she adopted was to agree with her interviewer whenever possible -- a tactic meant to convey contrition.

More than once, Guthrie persisted in asking Sandberg about why Facebook waited until now to address data-breach concerns when the company was aware of issues concerning Cambridge Analytica as long as two or more years ago.

“I don't think that's true,” said Sandberg, who then added, “But of course, you're right.” Huh?

Another tactic she used was the “I’m hurt too” strategy.

“How do you win back the trust that you had with so many people?” Woodruff asked her.

“Trust is a really important thing. You’re asking a really important question,” Sandberg said, flipping her hair and leaning in. “And you know, for me personally, the fact that people would not trust us -- I take responsibility for that and that hits hard.”

Of the two interviewers, Guthrie flummoxed Sandberg more than Woodruff did. “A cynic would look at this and say Facebook could have done all of this a long time ago and not until its stock started tanking did Facebook start taking it seriously. You care about privacy now because it’s hitting the bottom line hard,” Guthrie said.

“Well, we cared about privacy all along,” Sandberg insisted, although a viewer watching at home was challenged to believe her.

On Tuesday, Sandberg's counterpart at Facebook, Mark Zuckerberg, will start two days of scheduled testimony before members of Congress. Look for more of the same -- a robotic personality who will try to act as if he cares.-