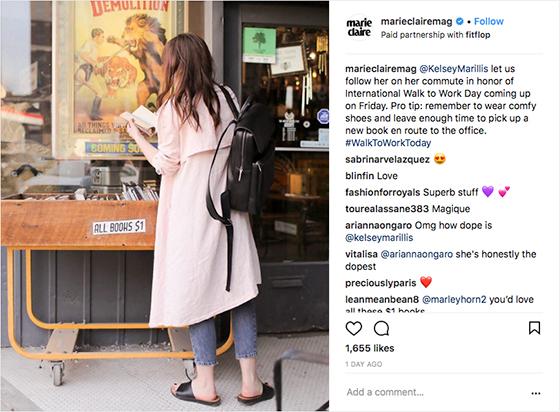 To remind everyone of the health benefits that can come from something as simple as a walk, April 6 has been named International Walk to Work Day. Hearst Magazines Digital Media (HMDM) is partnering with FitFlop to encourage its readers to participate.

“[FitFlop] came to us with an interest in raising awareness of International Walk to Work day because it perfectly aligns with their mission, which is to provide support to its wearers from the feet up so that they may focus their attention on worthwhile things, not their foot pain,” Todd Haskell, senior vice president and Chief Revenue Officer for HMDM, told Publishers Daily.

FitFlops was founded in 2007 by Marcia Kilgore, who worked with biomechanists to create the shoes.

Elle, Harper’s Bazaar and Marie Claire are promoting the day through a special social-first campaign featuring the shoes being worn by women from many different spheres.

“With this campaign, we are distributing content on Instagram and Facebook with each element designed through the brand lens,” Haskell says. Elle will look at the day from a global perspective, showing women walking to work from “LA to Toronto to the Philippines.”

The campaign also taps into HMDM’s influencer network, filled with lifestyle, fashion and beauty content creators. Hearst will promote a total of seven influencers across its channels. They will also boost the campaign on their own social channels, amplifying the coverage to millions.

“By creating their own content around International Walk to Work Day, the influencers we are working with will be providing a glimpse into their daily lives, while delivering an impactful and experiential opportunity for FitFlop,” Haskell says. “It’s an opportunity to engage with our followers in a new way.”